The Global Port Tracker report by the National Retail Federation and Hackett Associates suggests that after a year of fluctuations driven by the uncertainty of the trade war with China, volume at the nation’s major retail container ports is expected to return to its usual seasonal patterns during the first few months of 2020.

In fact, according the Global Port Tracker, U.S. ports handled 1.67 million Twenty-Foot Equivalent Units in November, the latest month for which after-the-fact numbers are available; that was down 11.2% from October and 7.5% lower year-over-year.

With on-again, off-again progress on trade negotiations reported throughout the fall as well as other factors affecting shipping, an expected surge ahead of the canceled December tariff increase did not materialize.

Specifically, December was estimated at 1.7 million TEU, 13.4% down from unusually high numbers seen in December 2018, when retailers had frontloaded imports ahead of a scheduled January 1, 2019 tariff increase that was ultimately postponed. 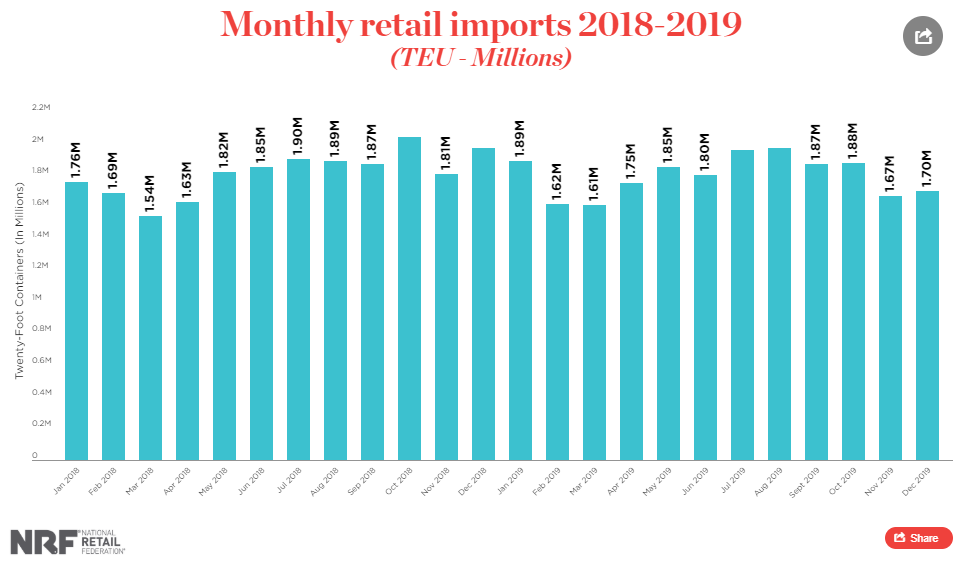 While numbers for the full year are not yet final, estimates indicate that 2019 came in at 21.6 million TEU, a 0.9% drop from 2018 but still the second-highest year on record. Imports during 2018 hit a record 21.8 million TEU, partly due to frontloading ahead of anticipated 2019 tariffs.

What is more, January is forecast at 1.8 million TEU; 5% lower from January 2019. February is forecast to be down 4.9% year-over-year at 1.54 million TEU, but March is expected to be up 5.2% at 1.7 million TEU, with both swings tied to fluctuations in the Lunar New Year calendar and related factory shutdowns in Asia.

The NRF Vice President for Supply Chain and Customs Policy Jonathan Gold noted that “we’ve been through a cycle of imports surging ahead of expected tariff increases – some of which got delayed, reduced or canceled – and falling off again afterward. That’s not good for retailers trying to manage their inventory levels or trying to make long-term business plans. And tariffs are never good for consumers, businesses or the economy,” adding that

We’ll be more confident after we see the Phase One agreement signed, but right now 2020 looks like it should be back to what used to be normal.

Namely, President Trump is scheduled to sign a “Phase One” partial trade deal with China on Wednesday, January 15; it is said that tariffs that took effect in September will be lowered and those set to take effect on December 15 will be cancelled, while others still remain in effect.

Hackett Associates Founder Ben Hackett noted that “it is not surprising that even the Federal Reserve suggests that the impact of the trade war has a negative impact on the U.S. economy,” citing recent government data on declines in industrial production and increases in inventory-to-sales ratios; the combination of reduced output counterbalanced by increased inventory roots the uncertainties of the tariff wars.

Global Port Tracker is produced for NRF by the consulting firm Hackett Associates and covers the U.S. ports of Los Angeles/Long Beach, Oakland, Seattle and Tacoma on the West Coast; New York/New Jersey, Port of Virginia, Charleston, Savannah, Port Everglades, Miami and Jacksonville on the East Coast, and Houston on the Gulf Coast. 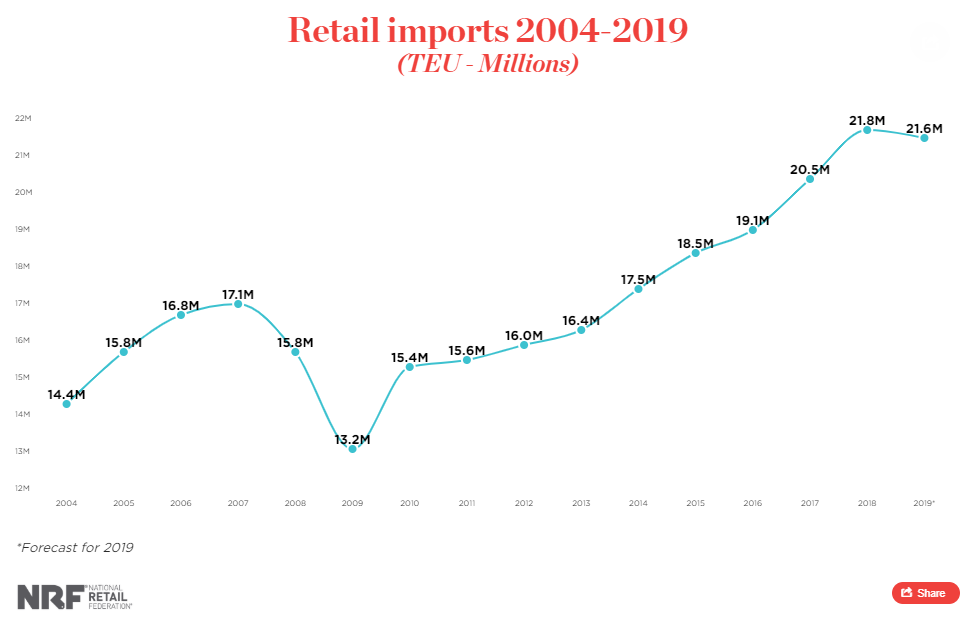