US needs more marshalling ports to keep up with the offshore wind demand, study finds 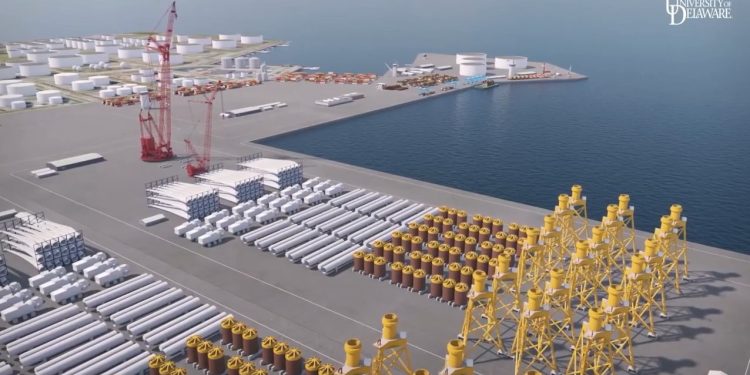 University of Delaware researchers Sara Parkison and Willett Kempton have published a paper in the journal Energy Policy that highlights the infrastructure required to meet targets for offshore wind power generation.

The UD report reveals that the nation’s existing and planned marshaling ports, the assembly areas critical to building and deploying offshore wind turbines, will be insufficient by 2023 to meet state and federal commitments. Further, the available marshaling port area will meet less than half of projected demand through 2050.

This study is not an off-the-cuff estimate

It is a detailed analysis informed by insights from industry experts, including vessel operators, port operators, developers and people who have been doing this for 20 to 30 years. And it shows that the industry is facing a real bottleneck.

…Sara Parkison continued. She also stressed that “Stated simply, the amount of marshaling area that we have is too little and the amount that is planned will not be enough, creating a significant shortfall that will have ramifications on the growth of the offshore wind industry.”

Parkison explained that to prepare for the growth of offshore wind turbines in the U.S., it’s necessary to think about using domestic supplies and infrastructure, rather than solely relying on an international global supply chain. Currently, however, U.S.-based infrastructure is not robust enough to meet demand.

A marshaling port provides a staging ground where turbine parts for a structure as tall as the Eiffel Tower can be housed, partially assembled or readied before they are installed in the ocean. The area is both challenging to locate and to develop.

The total planned and existing marshaling ports in the U.S. are expected to provide less than half of what will be needed to support the development of turbines over the next three decades. Complicating matters, this amount of available marshaling area will be strained to support multiple competitors vying to use the same marshaling ports, vessels and other resources to achieve their goals and timelines.

To avoid a domino effect, where delays on one project cause a cascade of disruptions elsewhere, the report offers three simple solutions:

Europe has been in the offshore wind energy business for 30 years. Its infrastructure is mature and includes fine-tuned methods for rapidly deploying offshore wind turbines safely, efficiently and economically. For comparison, the existing and planned U.S. marshaling ports comprise less than a third of the area and deployment capacity of Europe’s top three most used ports for marshaling.

And yet, in the U.S. we’re looking to install twice as much power capacity over a shorter amount of time than the EU has accomplished over the last 20 years

As informed, the U.S. will need to “make do” with existing marshaling area by using alternative methods, such as feeder barges situated offshore that can ferry equipment from port to installation vessels located at sea—kind of like a relay for turbine parts. The approach, however, is not without its hurdles.

According to the report, transitioning to a cleaner economy will take commitment, cooperation and collaboration, but the benefits to the nation, and planet, would be many.

Claire Richer, director of Offshore Wind with the American Clean Power Association, called the report a useful tool to help justify funding for expansion of offshore wind infrastructure to Congress.