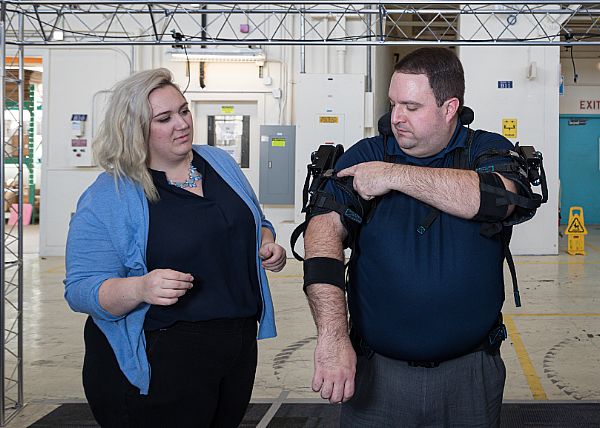 US Navy testing exoskeletons to reduce load for sailors

The Naval Undersea Warfare Center (NUWC) Division, Keyport, a component organization of NAVSEA, is planning to take a load off the shoulders of the sailors and civilian workforce by developing technology known as exoskeletons.

This forms part of NAVSEA’s “Campaign Plan 2.0” governing its strategic vision, which includes the goal of improving systems and capabilities while equipping people with the best tools available.

Human Assistive Technology (HAT) is the development and use of technology to reduce the load and strain a person’s body experiences while performing a task, such as lifting or moving loads or working overhead for extended periods of time.

A human is part of every system we develop, so their needs have to be considered. This is the basic idea behind Human Systems Integration (HSI),

His work focuses on exoskeletons, but HAT convers a range of technologies that can assist a human more efficiently in training or working.

Clark said exoskeletons are not just intended for those who have to move heavy loads but can be used for something as routine as painting a ceiling or overhead space. A person holding their arms aloft quickly suffers fatigue, and repetition of such movements over time has the potential to result in injuries. HAT is a promising solution to reduce or eliminate these injuries.

The exoskeleton industry is relatively young, so there is not a large body of research on how effective these systems are. The research to date shows promise for upper body exoskeletons in jobs that are very repetitive and predominately overhead. We’re less clear on how effective they will be for the varied tasks that a shipyard mechanic might do during their day,

However, Clark also cautioned that this technology has unintended consequences to the fleet, as they take time to don and doff and they add weight and heat to the worker, while restricting some movement.

Currently Clark and his team are doing small-scale trials and demonstrations of the technology.

The Army is testing some powered and unpowered lower body systems which are showing some promise for soldiers on long marches, and the Air Force is about to start testing a full body powered exoskeleton that will mainly be used in warehouses or maintenance shops.

We’re working closely with the shipyard Ergonomics Community of Practice (CoP), which is made up of the ergonomics leads from the four shipyards, and some intermediate-level maintenance activities,

Our goal is for every worker to have a long and healthy career. That attitude pays for itself through a more productive workforce which sees fewer lost workdays, lower brain drain from early retirements and reduced healthcare costs,