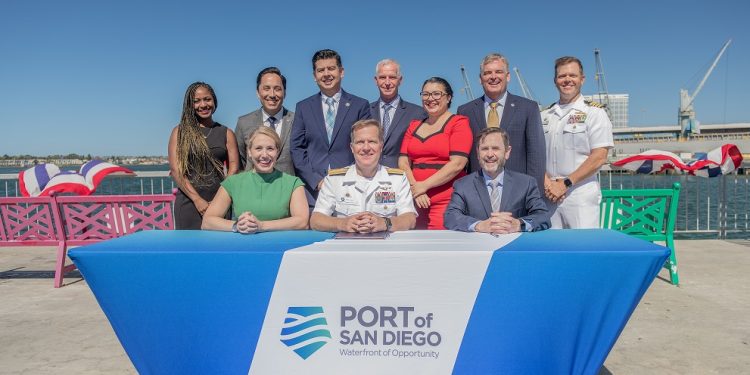 To further reduce greenhouse gas emissions and improve air quality and public health on and around the San Diego Bay Working Waterfront, Navy Region Southwest and the Port of San Diego have formed a partnership that gives the U.S. Navy access to participate in California’s Low Carbon Fuel Standard (LCFS) market.

The groundbreaking federal/state initiative will provide millions of dollars for further electrification efforts for both Naval Base San Diego and the Port of San Diego.

The Navy’s participation in this program will be the first ever participation by the Department of Defense in this type of carbon reduction effort. The Navy will generate LCFS credits while ships are plugged into shore power, rather than generating power internally using traditional, carbon-intensive fuels, and limiting emissions of greenhouse gasses in the surrounding community.

This is a win-win. We are proud to be working with the Navy on this and look forward to cleaner air and improved public health for all who live, work, and play on and around San Diego Bay

The LCFS is a cap-and-trade-like program where the producers of fossil fuels must either increase the use of plant-based carbon or buy credits to meet the requirement. The Navy will generate credits via its current use of shore power for its fleet. One LCFS credit generated is equivalent to one metric ton of carbon dioxide reduced.