The demand for distillates (diesel) reduced by 10.9% between March and April and met indicators that freight trucking and industrial activity slowed. In addition, API’s economic indicator, the API DEI (Distillate Economic Indicator) fell by 0.3% in April with a three-month average level of zero, which has reflected the slowing of US industrial production.

What is more, US petroleum international trade weakened between March and April. In fact, US petroleum imports increased by 1.1 mb/d, around 60% of which was crude oil, while crude oil exports fell by 0.4 mb/d, contributing to increased domestic crude oil inventories.

Despite the fact that the growth in petroleum imports was largely seasonal, the decline in crude oil exports could reflect risen trade frictions, as well as attempts to buy Iranian crude oil before sanction waivers expired on May 2.

Other April highlights include:

Strong domestic U.S. oil and natural gas production has continued to be an enabler for the United States’ international agenda. This month’s report particularly reinforces the critical importance of U.S. international trade relations and the infrastructure to supply our trading partners 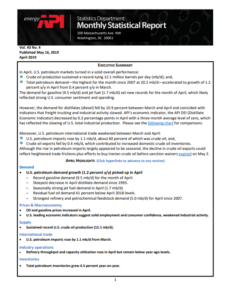