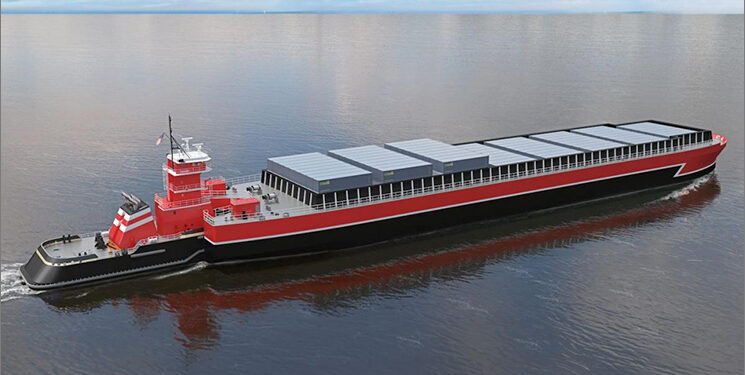 Winter weather can cause the waters off the coasts of New England states –part of M-95, a crucial marine highway running all the way from Maine to Florida– to be too rough for tugs to safely push or pull cargo-loaded barges. That’s why DOT’s Maritime Administration (MARAD) has supported the Maine Port Authority’s development of a next-level cargo vessel designed specifically to handle that unique marine environment.

In addition to increasing safety and reliability for mariners and shippers, the project shows great potential to reduce e­­­­­nergy consumption and air emissions while offering relief to cars and trucks on the busy I-95 land-side corridor.

This week, port officials took a major step forward in this effort by releasing a design for the first U.S. containerized articulated tug barge, or “ATB,” made possible with funding from MARAD.

Unlike a tug and barge combination, an ATB is mechanically linked, combining the economics of tug and barge operations with the speed, maneuverability, and heavy weather-reliability of a ship.  The vessel proposed by the Maine Port Authority would support the Northeast Marine Highway Expansion Project’s efforts to expand container-on-barge service between Newark, NJ; Boston, MA; and Portland, ME.

In the start, I was frank with you propecia before and after has changed my existence. It has become much more fun, and now I have to run. Just as it is fabulous to sit.