EIA said that US crude oil exports averaged 1.1 million barrels per day (b/d) in 2017 and 1.6 million b/d so far in 2018, an increase from less than 0.5 million b/d in 2016. This increase happened despite the fact that US Gulf Coast onshore ports cannot fully load Very Large Crude Carriers (VLCC). Instead, export growth was achieved using smaller and less cost-effective ships.

Because of their large size, VLCCs require ports with waterways of sufficient width and depth for safe navigation. All onshore US ports in the Gulf Coast that trade petroleum are located in inland harbors and are connected to the open ocean through shipping channels or navigable rivers. Although these channels and rivers are regularly dredged, they are not deep enough for deep-draft vessels such as fully loaded VLCCs.

Data from the US Maritime Administration (MARAD) for 2015, the latest year for which data are available, show that the two largest ports of call for tankers carrying crude oil and petroleum products in the US are lightering zones. The South Sabine Point and Southtex lightering zones each had nearly 250 million deadweight tons of tanker traffic volume in 2015. 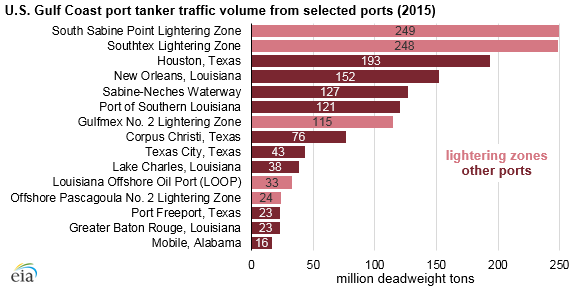 Currently, most US Gulf Coast petroleum ports can accommodate vessels with capacities of approximately 500,000 barrels of crude oil (AFRAMAX). The number of ports that can accept vessels with capacities of approximately 900,000–1,000,000 barrels (SUEZMAX) is limited. Four AFRAMAX-sized vessels or two SUEZMAX-sized vessels are needed to carry the same amount of crude oil as a single VLCC. The Louisiana Offshore Oil Port (LOOP) is currently the only US facility able to accommodate a fully loaded VLCC.

MARAD currently does not have applications for new deepwater ports similar to LOOP. Instead, the most likely crude oil export projects with the intention to fully load VLCCs will be located near the port of Corpus Christi in southern Texas.

The inability to fully load larger and more cost-effective vessels affects prices for US crude oil exports. Using a number of smaller ships requires a wider price spread between US crude oil and international crude oil prices to balance the lower economies of scale and costs associated with reverse lightering and partial loadings.