The US Secretary of State Mike Pompeo announced on April 22 that the United States will end all exceptions for countries currently purchasing oil from Iran. As he specifically said, the country will no longer grant any exceptions. 'We’re going to zero across the board'.

The secretary said the US is fulfilling its promise to get Iran’s oil exports to zero and deny the regime the necessary revenue to fund terrorism and violent wars abroad.

Countries that had previously bought Iran's crude oil have been transitioning to new suppliers. Commenting on this development, he said that the US stands by its allies and partners as they transition away from Iranian crude to other alternatives.

He also added that Saudi Arabia, the United Arab Emirates, the United States and other oil-producing countries are committed to ensuring that global oil markets remain adequately supplied.

However, countries that will continue to import oil from Iran risk losing access to the US financial system and the ability to conduct business with the United States or US companies. 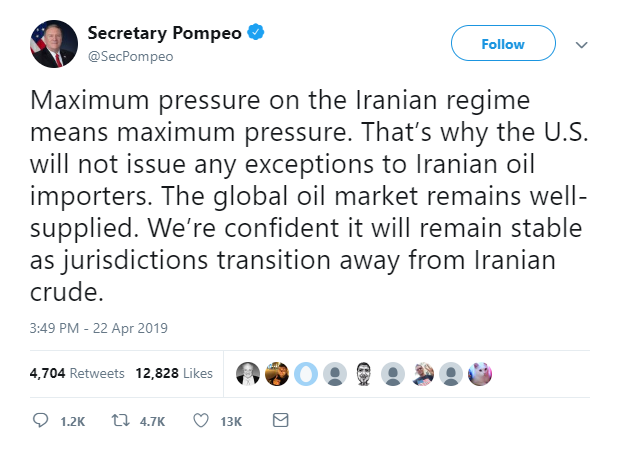 The US had awarded temporary exemptions to eight countries allowing them to continue buying Iranian oil. These countries are: China, India, Greece, Italy, Taiwan, Japan, Turkey and South Korea.

In addition, Mr. Pompeo highlighted that targeting Iran’s oil exports is critical because oil exports have  been the regime’s single largest source of revenue, 'which it uses to support terrorist proxies, fuel its missile development and engage in other destabilizing behavior'.

In fact, since the US withdrew from the Iran nuclear deal in May 2018, Iran’s oil exports have decreased dramatically. Since then, more than 1.5 million barrels of Iranian oil a day have been taken off the market.

On 8 May, U.S. announced the decision to withdraw from participation in the JCPOA (Joint Comprehensive Plan of Action) and to re-impose US nuclear-related sanctions. The announcement triggered global discussions about implications on international trade, especially in shipping. Following this decision, in August, President Trump issued an Executive Order which essentially re-imposed the secondary sanctions against Iran.

US sanctions have denied the regime direct access to over $10 billion in oil revenue since May, which marks a loss of at least $30 million a day in oil revenues alone.

We will continue to apply maximum pressure on the Iranian regime until its leaders change their destructive behavior, respect the rights of the Iranian people, and return to the negotiating table

The announcement comes after the State Department’s April designation of the Islamic Revolutionary Guard Corps as a foreign terrorist organization. Both showcase 'the United States' commitment to disrupting Iran’s terror network and changing the regime’s malign behavior,' the White House reported in April 22.