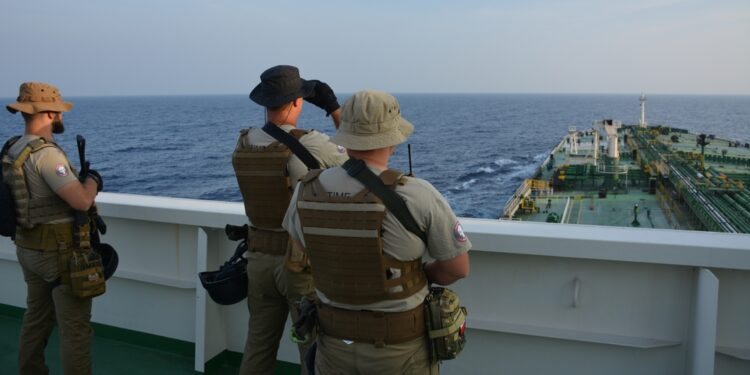 The US established a new Combined Task Force 153 within the Combined Maritime Forces in the Middle East to focus on the Red Sea.

The new task force reflects growing international interest in the Red Sea area, and aims to “enhance security and stability” in the region, according to US Navy Vice Adm. Brad Cooper, who included combating human trafficking and narcotics and weapons smuggling as part of the mission.

While officials have not been explicit about the task force playing a role in countering threats from Houthi forces in Yemen, Houthi maritime attacks are a risk that the task force will seek to deter.

Part of CTF 153’s mission will be addressing human trafficking and drug and weapons smuggling. The task force might also respond to humanitarian or environmental emergencies.

The Combined Maritime Forces was established in 2001 and today includes 34 member states. It is headquartered in Bahrain, along with US Naval Forces Central Command and the US Fifth Fleet. Previously, the group had three task forces with specific geographical areas or missions: CTF 150 covers areas outside the Arabian Gulf; CTF 151 focuses on countering piracy; and CTF 152 covers operations inside the Arabian Gulf.

According to IMB’s latest piracy report, although no incidents were reported there since the start of the year, the threat of piracy still exists in the waters off the southern Red Sea and in the Gulf of Aden, which include the Yemeni and Somali coasts.