According to Intermodal Association of North America (IANA), its activity was weak during the second quarter of 2019. IANA's estimate concerning the intermodal container activity highlights the deepening of the freight recession that railroads and trucking companies saw in the 2019 second quarter.

In general, although the East Coast ports took a larger share of the import container trade, IANA supported that volume in the trans-Pacific trade lane remains weak due to the U.S.-China trade war, which is still in continuance.

Moreover, domestic rail and truck container volumes declined by 6.3% to 1.87 million from a year earlier as dry van rates hit a nearly two-year low, sending more freight back to trucks. 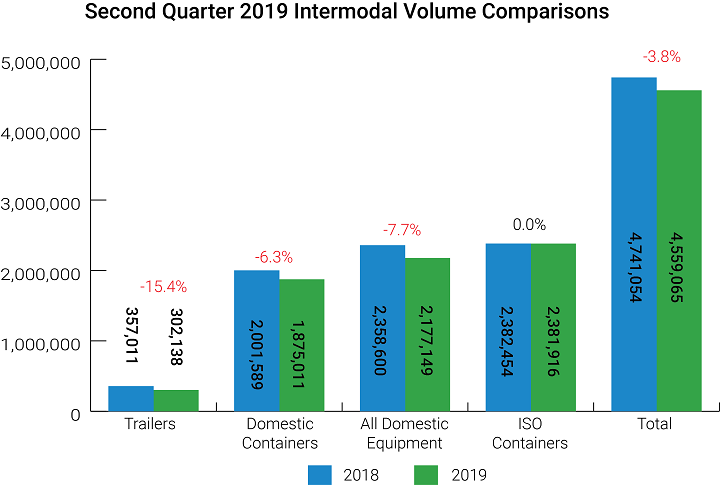 We had hoped that domestic intermodal volumes would have recovered more at this point...Volumes for the rest of the year are dependent on economic factors, highway capacity and trade policy decisions.

He continued that the issues that affected the volumes were one-of-a-kind occurrences, such as:

The intra-Southeast corridor showed the greatest strength at 3.2%, while the Midwest-Southwest corridor was down 7.9%.

Trucking capacity stayed loose and prices were much softer than in 2018 creating more intense competition with intermodal than last year.

IANA concluded that the outlook for the second half of 2019 hinges on 'where trade tariffs go'. Yer, if tariffs were to be extended, 'the second half would certainly decline.'