by The Editorial Team
in Shipping, Videos
FacebookTwitterEmailLinkedin

President Donald Trump signed a partial trade deal with China on January 15, in attempt from the world’s two largest economies to contain an economic struggle. According to the deal, the Trump administration aspires to address American concerns over Chinese trade abuses.

Nevertheless, CNBC reports that the agreement leaves unanswered questions about the way the US and China will implement its terms and prevent further tensions.

The deal aims to mitigate practices that bothered the White House, such as intellectual property theft and forced technology transfers, in exchange for Chinese market access. It also contains a $200 billion increase in Chinese purchases of US goods over two years.

Commenting on the agreement, the Chinese leader characterized it a good deal for China, for the US and for the whole world. For his side, the US Trade Representative Robert Lighthizer said that the accord addresses China’s trade practices.

Watch: Many Turkish ports out of action after massive earthquake

Now, the US wants to begin negotiations on a second piece of the deal before the presidential election in November, Lighthizer said. However, Trump had stated that he might want to wait to finish until after the election, in order to make a better deal.

What is more, according to the agreement, the Trump administration scrapped tariffs that were to take effect last month, and also agreed to reduce duties on $120 billion in products to 7.5%.

Nevertheless, the White House will leave tariffs on another $250 billion in Chinese products in place for now. In this aspect, Treasury Secretary Steven Mnuchin said a second phase of the agreement will hope to include more tariff relief.

You may see the accord document below 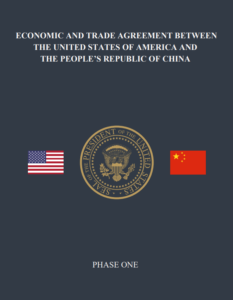