The US Department of the Treasury’s Office of Foreign Assets Control (OFAC) has blacklisted a large 'oil-for-terror' shipping network that is directed by and financially supports the Islamic Revolutionary Guard Corps-Qods Force (IRGC-QF).

Additionally, OFAC issued an international advisory to alert to the US sanctions risks for parties involved in shipping petroleum or petroleum products from Iran, after the expiration of any applicable significant reduction exceptions on 2 May 2019.

In spring 2019 alone, this IRGC-QF-led network employed more than a dozen vessels to transport nearly 10 million barrels of crude oil, predominantly to the Syrian regime, sold for more than half a billion dollars, OFAC noted.

Iran continues to take provocative actions to destabilize the region and the world. Treasury’s action against this sprawling petroleum network makes it explicitly clear that those purchasing Iranian oil are directly supporting Iran’s militant and terrorist arm, the IRGC-Qods Force,

In connection with these activities, the United States is targeting private and public sector entities around the world that engage in sanctionable conduct, including those involved in procuring petroleum and petroleum products from Iran to Syria, China, and elsewhere.

For example, in November 2018, August 2019, and September 2019, OFAC sanctioned individuals and entities in a number of countries involved in schemes in which the sale and shipment of Iranian oil to Syria provided hundreds of millions of dollars to Iran’s terror proxy groups, including the IRGC-QF.

As such, OFAC now announced the designation of some 16 entities and 10 individuals pursuant to E.O. 13224, and is also identifying 11 vessels as property in which blocked persons have an interest.

As of November 5, 2018, the purchase, acquisition, sale, transport, or marketing of petroleum or petroleum products from Iran is sanctionable pursuant to E.O. 13846. Knowingly providing insurance or re-insurance for the transport of Iranian petroleum and petrochemical products also is sanctionable. The US Treasury Department urges international companies to ensure they are conducting the necessary due diligence to avoid engaging in sanctionable activity with entities that support the Iranian regime’s malign activity. 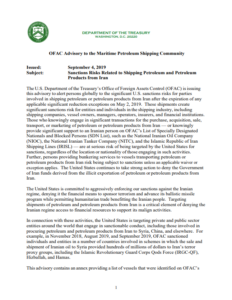