As there are only six months until the implementation of the ‘Global Sulphur Cap’, ICS has published an updated guidance to assist shipowners comply with new UN International Maritime Organization regulations.

Applying from 1 January 2020, the legal framework will require from merchant ships globally to use fuel with a sulphur content of less than 0.50% or use alternative mitigation technologies.

The ICS guidance contains the latest IMO decisions addressing issues like fuel oil non-availability reporting, fuel safety and fuel quality. The updated guidelines will also help ships avoid port state control difficulties that might come up, through no fault of the operator, and allow shipowners and ships’ crews to address the practical challenges due to this multi-fuel scenario.

The report ‘Compliance with the 2020 ‘Global Sulphur Cap’, includes details of the new requirements to enable on board sampling to verify fuel oil compliance. It also incorporates a new section on managing different fuels, an updated FAQ and a new appendix with the IMO standard template Fuel Oil Non-Availability Report (FONAR).

Regarding the selection of compliant fuels, shipowners and operators are therefore recommended to ensure that ISO 8217:2017 is specified as the required standard when ordering 0.50% Smax fuels for use after 1 January 2020.

To address the anticipated fuel characteristics and properties of the marine fuels that will be placed on the market to meet the 2020 sulphur requirements, ISO is developing a Publicly Available Standard (PAS): ISO PAS 23263. ISO PAS 23263 will provide additional guidance to the existing ISO 8217 specification for fuels for use in marine diesel engines and boilers; for example, compatibility and stability of new blends of fuel oil. ISO PAS 23263 is expected to be published in the last quarter of 2019.

The ship specific Implementation Plan will need to consider when and where any new 0.50% Smax fuels will be bunkered and the designated tanks into which they will be loaded. Shipowners and operators will need to decide between:

Once the Implementation Plan has been developed, shipping companies are recommended to approach the ship’s flag State and classification society and request that it reviews the Plan for adequacy and completeness or as deemed appropriate by the flag State. This may prove helpful should problems emerge during any PSC inspections.

The risk assessment should take into consideration the fuel oil properties detailed in Sections 3 and 4 of this ICS Guidance. Appropriate action plans should be developed in order to address and mitigate any specific safety risks identified. These plans could include the following examples:

IMO has developed a standard format for reporting fuel oil non-availability. The following factors should be considered before deciding whether to bunker non-compliant fuels:

Whilst considering an individual FONAR report, Administrations may take into consideration the following:

These new regulations are good for human health and good for the environment. With just six months to go before implementation these free ICS guidelines will help shipping companies with the vital task of preparing for compliance. We strongly recommend that shipowners prepare an Implementation Plan for each of their ships using the template agreed by IMO

He also added that the industry is focused on moving forward, but uncertainty remains about the availability of safe and compliant low sulphur fuels, and the operational challenges related to their use. For this reason, he believes that it is very important for everyone involved, including governments, oil producers and bunker suppliers, to redouble their efforts in order to make sure that safe and compatible fuels will be available in every port worldwide.

You may check them in the PDF below 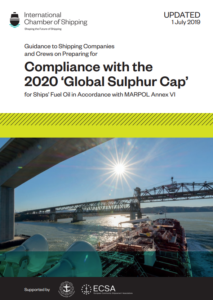