UNCTAD: Ships getting bigger, but number of companies decreases

At the end of 2020, there were 944 container ports served by liner shipping services. This is an increase of 13% compared to the 834 ports in the first quarter of 2006. The size of container ships calling in most ports has also increased during these 15 years, but the number of companies has decreased.

To estimate a country’s position in the global liner shipping network, in 2004, UNCTAD developed the Liner Shipping Connectivity Index (LSCI).

According to the index, the average size of the largest ships has increased significantly, but the average number of companies has decreased. The deployed container carrying capacity has also increased, albeit with some volatility. The other three components remained relatively stable with a slight downward trend.

In response to growing demand, companies may either deploy bigger ships, or deploy more ships, or a combination of both. The total deployed container carrying capacity is the result of the number of port calls multiplied with the average vessel size. 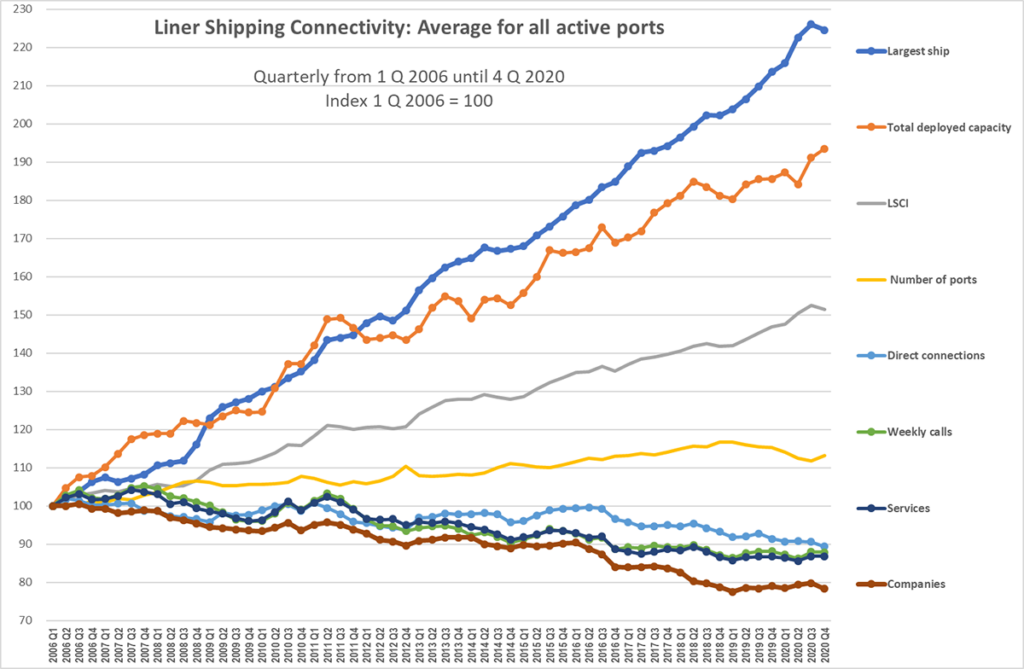 For each port, the number of companies that provide scheduled services in each quarter is known, as well as the size (TEU) of the largest ship that is deployed on those services.

During the 15 years covered by UNCTAD, in the majority of ports, the size of the largest ship has gone up, while the number of companies providing services has gone down. Both developments reflect a trend towards industry consolidation.

As ship sizes have gone up faster than trade volumes and total deployed capacity, the number of services needs to go down if ships are to remain fully loaded

The average (per port) of the largest ship increased by 125% between the first quarter of 2006 and the fourth quarter of 2020, while the average number of companies decreased by 22% (from 7.8 to 6.1 companies) during the same period.

Ports are the nodes that bring together the ports’ two clients: the carriers and the shippers. Being able to accommodate ever larger ships is a positive indicator of a port’s infrastructure and efficiency, which in principle should benefit both clients. However, if ship sizes go up without bringing additional cargo, ports may be confronted with a trade-off, where they need to invest in more dredging, bigger cranes and expanded intermodal connections to accommodate higher peak demand, while at the same time being left with a smaller number of bigger carriers. In this scenario, the carriers gain bargaining power vis-à-vis both, the ports and the shippers.

Thus, for many ports, investing in infrastructure so as to accommodate larger ships to benefit one group of clients – the carriers – may come at the price of less choice for the other group of clients, the shippers. On the one hand, larger ships help achieve economies of scale and reduce emissions and costs on the sea-leg, on the other hand, less competition poses the danger that cost savings made by the carriers may not be passed on to their clients, the shippers.