A revised draft text of an agreement under the United Nations Convention on the Law of the Sea (UNCLOS) concerning the conservation and sustainable use of marine biological diversity of areas beyond national jurisdiction has been made available on Wednesday, November 27, 2019.

In particular, the negotiations aim to address the topics identified in the package agreed in 2011, in order to

to enable delegations to take stock and to facilitate further progress in the negotiations at the fourth session of the Conference.

Notably, this draft version is essential, since there is only one more negotiating session planned, which is due to take place at the U.N. HQ in New York during the first half of 2020.

In fact, the negotiations shall address “the conservation and sustainable use of marine biological diversity of areas beyond national jurisdiction; in particular, together and as a whole, marine genetic resources, including questions on the sharing of benefits; measures such as area-based management tools, including marine protected areas; environmental impact assessments and capacity-building and the transfer of marine technology.”

On their part, delegations are encouraged to reflect on them, as well as the compilation of textual proposals contained in the conference room paper issued at the conclusion of the third session, in order to consider whether agreement might be reached on specific provisions or whether additional proposals might be suggested for the purpose of reaching an agreement.

In August, the IMO Secretariat attended the 3rd (in the series of four) Intergovernmental Conference (IGC), taking place at UN Headquarters in New York, US, from 19 to 30 August in order to develop a legally binding international instrument, under the UN Convention on the Law of the Sea (UNCLOS), on the conservation and sustainable use of marine biological diversity in areas beyond national jurisdiction - known as 'BBNJ'.

In 2018, the UN announced that it will take steps to protect the high seas. It was said that in two years’ time, government representatives will attempt to conclude in a binding agreement to protect these areas from over-exploitation.

To find out more about the revised draft, click on the PDF bellow. 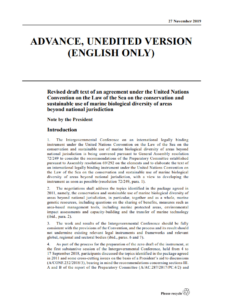