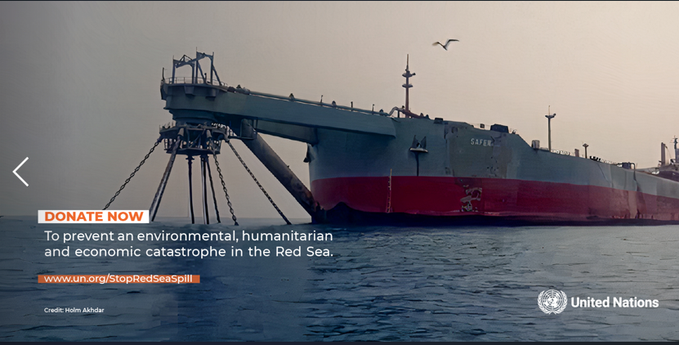 A social media campaign launched by the United Nations aims to bring the world closer to prevent FSO Safer, anchored off Yemen, from causing an oil spill that could spell disaster for the region and beyond.

The goal is to raise funds to start the $80 million emergency operation to transfer oil from the FSO Safer to a temporary vessel.

The FSO Safer is moored off Yemen’s Red Sea coast and contains more than a million barrels of oil. The tanker is beyond repair, and the fear is that it could soon break apart or explode.  At 376 metres long, it is among the largest tankers in the world, and holds roughly four times the crude oil that was spilled during the Exxon Valdez disaster, off Alaska, in 1989.

The Safer has been anchored just a few miles off the Yemen coast for more than 30 years, but the war between the pro-Government coalition and Houthi rebels saw offloading from the vessel, as well as maintenance, grind to a halt in 2015.

Today I launched a @UN crowdfunding campaign because we urgently need funds to start the emergency operation before it is too late. Learn more: https://t.co/H6q5MJWBDg pic.twitter.com/moFtjedoKn

The UN is ready to implement the emergency rescue operation but is delayed because of insufficient funding for the transfer operation. Some three-quarters of the money required has been received, following the announcement of a $10 million pledge by Saudi Arabia this week.  The United States is also working towards a $10 million contribution.

The UN Humanitarian Coordinator in Yemen, David Gressly, launched the crowdfunding campaign, which encourages people everywhere to contribute towards raising $5 million in individual donations by the end of this month so that work can start in July.

The transfer operation is part of a two-track plan, with an overall cost of $144 million, which also involves installing a replacement vessel for the FSO Safer.   Meanwhile, the UN Special Envoy for Yemen, Hans Grundberg, continues his engagement in the wake of the recent extension of the two-month truce between the Government and Houthi rebels.

The envoy visited the Houthi stronghold Sana’a last week to discuss issues, including the proposal for the phased re-opening of key roads in Taiz and other governorates.   The UN proposal takes into consideration various concerns expressed by both sides during discussions that started in Amman, Jordan, last month.

Mr. Grundberg is expecting an imminent response from Sana’a on the proposal.

The opening of roads is a measure to alleviate the suffering of Yemenis, as well as bring about some sense of normalization and facilitate freedom of movement for civilians, UN Spokesperson Stéphane Dujarric told journalists in New York .

Mr. Grundberg remains committed to working with the parties to implement all elements of the truce to continue delivering its tangible benefits to Yemeni women, men and children, as well as engaging on next steps to consolidate the opportunities provided by the truce to put Yemen on a pathway to peace