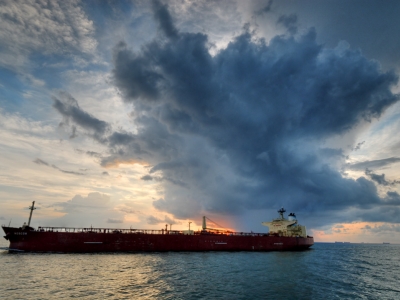 A scheme to tax a global shipping industry that emits as much CO2 as Germany to help poor countries cope with climate change impacts has gained a foothold at UN talks in Durban, negotiators and green groups said Thursday.

For the first time, the 194-nation UN Framework Convention on Climate Change (UNFCCC) has put a draft proposal on the negotiating table that identifies maritime transport as a potential source of revenue.

"A single ship can emit as much carbon dioxide in one year as several small island states," said Tim Gore, a policy analyst at the charity Oxfam, which has help push the idea of a so-called "bunker fuel tax".

Oxfam calculates that the levy, based on a carbon price of 25 dollars a tonne, would -- besides cutting greenhouse gases -- generate some 25 billion dollars a year by 2020.

The cost of transport under this plan would go up by 0.2 percent.

2020 is the year that a new Green Climate Fund for developing nations conceived at the 2009 Copenhagen climate summit is to supposed to have ramped up to 100 billion dollars annually.

Negotiators are still debating the new fund's architecture, but even if a consensus is reached in Durban it remains, for the time being, "an empty shell," in the words of UN Secretary General Ban Ki-moon.

A tax on international shipping -- which accounts for about three percent of global emissions -- could help fill those coffers, and thus far is the only potential source of new funding with any traction.

Other potential schemes include a tax on international financial transactions, and a similar levy on cross-border aviation traffic.

No one is predicting that a tax on sea transport will be adopted at this year's climate meet, but just getting the proposal on the table is an important step, campaigners say.

"The taxation of maritime sector emissions is the most promising source of funds at this point," said Gore.

"This is the one where we can make some real progress here in Durban."

Some 100,000 ocean-going cargo vessels crisscross the oceans, according to the International Maritime Organisation (IMO).

The shipping sector would rank seventh in the world in carbon emissions if it were a country, just ahead of Germany and behind Brazil.

A World Bank study released in September estimated that a carbon levy on both the shipping and aviation sectors could raise up to 250 billion dollars annually in 2020, and result in an emissions reduction of five to 10 percent.

A major concern, however, in the developing world is that a shipping levy would -- like a flat tax -- unfairly penalise poorer nations.

One proposal would be to use money raised by the tax to compensate developing countries for marginally higher import costs, leaving some 10 billion per year available for the Green Climate Fund.

A bunker fuel can only be put in place by the IMO, but many nations -- with the European Union in the lead -- are seeking to give the initiative a boost at the Durban climate talks.

In a joint statement last week, the International Chamber of Shipping (ICS), WWF and Oxfam said carbon emissions from merchant ships could be subjected to "market-based measures" as an incentive to reduce greenhouse gases.

ICS secretary general Peter Hinchliffe said the rules should be crafted under the IMO "with the same rules for carbon reduction applying to all internationally trading ships, but in a manner which respects the principles of the UN climate convention.

"If governments decide that shipping should contribute to the UNFCCC 'Green Climate Fund'," said Hinchcliffe, "the industry can probably support this in principle."