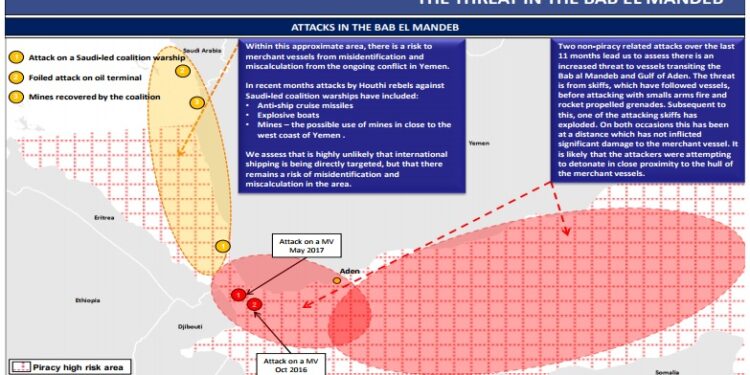 The North of England P&I Club draws attention to a new UKMTO notice which urges vigilance to vessels transiting Bab El Mandeb from the Gulf of Aden, following recent attacks on two vessels which fired  upon with small arms and rocket propelled grenades from multiple small skiffs.

”The notice draws attention to recent attacks on two vessels transiting Bab El Mandeb from the Gulf of Aden, where tankers were fired upon with small arms and rocket propelled grenades from multiple small skiffs. It reports that some of the skiffs involved were filled with explosives and during the attacks these explosives were detonated. On both these occasions the detonation was clear of the vessel being attacked; however it is assumed that the explosion was intended to be nearer to the vessel.” the Club emphasizes.

The notice highlights the importance of conducting a voyage risk assessment prior to entering high risk areas, and following the advice laid out in BMP4. In particular UKMTO advises:

”Operating in these waters requires thorough planning and the use of all available  information. The maritime threat environment is dynamic; the risks will not remain constant for subsequent visits. It is essential therefore, that Masters, Ship Security Officers and Company Security Officers carry out detailed Risk Assessments for each voyage to the region and for each activity within the region.”

All vessels transiting the Gulf of Aden and Bab El Mandeb should follow the guidance of BMP4 to the maximum extent possible and consider the use of embarked armed security. Recent attacks in 2017 serve to emphasise the importance of robustly following this guidance, concludes UKMTO.