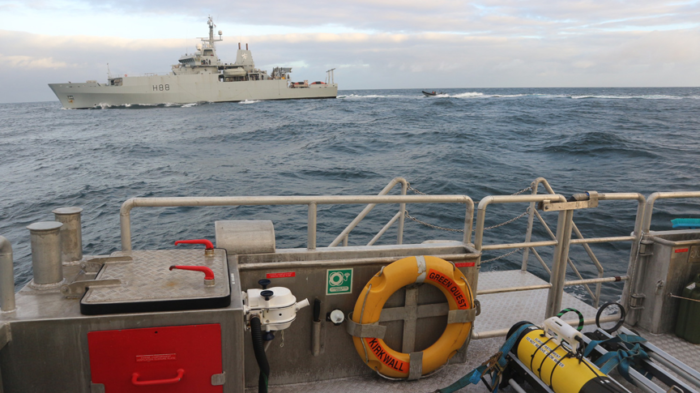 Above image is used for illustration purposes only / Credit: NOC

The UK Defence Science and Technology Laboratory and UK-based aerospace technology supplier GKN have developed a system based on Le Mans motor-sport technologies, aiming to demonstrate an energy storage option for the Royal Navy’s most advanced ships.

The project has demonstrated the capability to manage the energy demands of novel future capabilities such as the Dragonfire Laser Directed Energy Weapon (LDEW) currently being developed by Dstl & industry, the UK Laboratory said.

As explained, the Flywheel Energy Storage System (FESS) uses innovative high-speed & lightweight flywheels to provide high-power electrical pulses, reducing the impact of these systems to the rest of the ship, while avoiding the widely reported safety concern around battery-based systems.

The project has been collaboratively tested at both UK and US facilities, under the Advanced Electric Power and Propulsion Project Arrangement (AEP3) between Dstl and DE&S in the UK, and NAVSEA’s Electric Ship Office and the Office of Naval Research (ONR) in the US. US testing was also supported by US Coalition Warfare Program (CWP) funding.

Both nations utilised a Power Hardware-In-the-Loop (PHIL) approach, where a ‘real’ FESS was integrated into a virtual ship power system emulating a RN ship operating in real-time.

After testing the FESS at the Florida State University’s (FSU) CAPs facility, the FESS was brought back to the UK and tested at the Power Networks Demonstration Centre (PNDC) in Scotland. This has allowed the UK to develop its PHIL capabilities and allowed both nations to validate their facilities and models against each other.