UK shipping to face many changes in the future

The UK government released the report "Future of the sea" in which it describes how science and technology can provide solutions to the long-term issues affecting the sea. It presents a number of recommendations to help the UK exploit its current expertise to improve trade links, build marine capacity and tackle climate change.

According to the report, the shipping industry is a vital part of the UK economy, as 95% of imports and exports are carried by sea. The UK maritime sector is the largest in Europe, worth an estimated £14.5 billion.

Future patterns in trade, which will drive the shipping industry, are driven largely by demand. Growing population and development will increase the demand for the transport of goods and the drive to mitigate against climate change will put pressure on the shipping industry to lower CO2 emissions. As climate change progresses, new cross-Arctic shipping routes will open. New technologies will enable the UK to respond to these changes, but will also present legislative challenges, which the UK is well placed to address.

As a result of the growing population, the OECD estimates that global freight trade could more than triple by 2050. In particular, wealth and production in Asia will expand, making it an even more prominent global shipping hub. 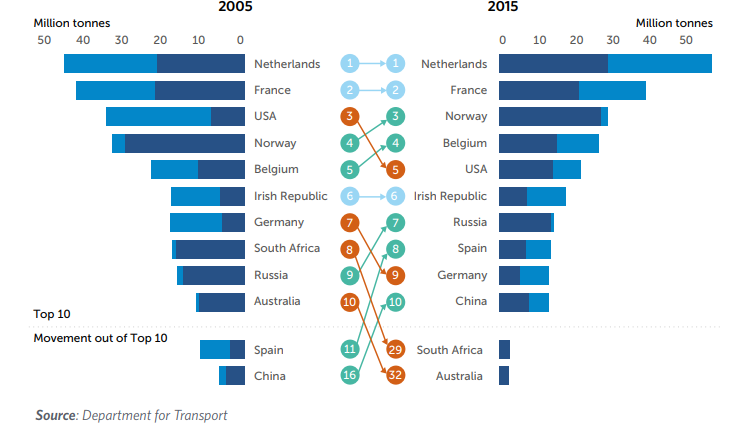 Furthermore, fully autonomous unmanned ships, capable of transporting cargo without a crew could be in operation as early as 2035. This will allow ships to become smaller and more efficient by removing the need to have an onboard crew. This is very important for short sea and coastal routes, as larger ships are used on long routes.

Autonomy can also improve ports' efficiency and operations. However, if the ports depend too much on automation, the risk to be exposed in cyber-attacks will increase as well. What is more, UK ports will have to adapt to the new type of freight being transported.

Continuing about UK ports, the report says that they will be exposed to increasing risk from sea level rise. The fact that this is likely to exceed 50 cm by 2080 has been highlighted as a concern for the flooding of UK ports, which can negatively affect disrupt port operations and infrastructure. While port flood events are reducing, because of better defences, financial losses could take place from pre-emptive closures.

For more information consult the Future of the Sea