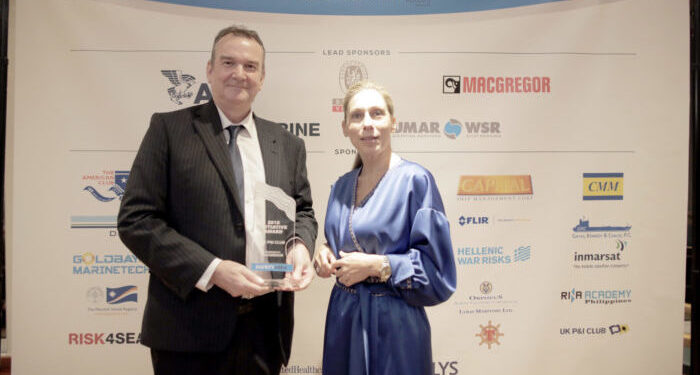 SAFETY4SEA is pleased to announce that UK P&I Club has received the 2018 SAFETY4SEA Initiative Award at a prestigious award ceremony which successfully concluded on October the 2nd at Yacht Club of Greece in Athens, the evening ahead of the SAFETY4SEA Conference.

UK P&I Club received the SAFETY4SEA Initiative Award, sponsored by MacGregor, for its strong commitment to the well-being of crew, operating for 22 years a Crew Health/PEME Program and further inspiring several other Clubs to follow this initiative in creating their own crew health programs. Other short-listed nominees for this category were: CSO Alliance, Mission To Seafarers and Poseidon Marine Supplies.

Presenting the award Mrs. Athena Kanellatou, Regional Director – Mediterranean, MacGregor said: “UK P&I Club Crew Health Program consists of pre-examination of both physical and mental health of the crew, turning a wishful thinking into positive action. Selecting the right crew is about qualifications and experience but also aptitude and personality. Congratulations to UK P&I Club for their initiative and safety culture preventing accidents and personal injuries on board”.

Accepting the award on behalf of UK P&I Club, Mr. David Nichol, Senior Loss Prevention executive, stated: “Crew illness claims are consistently among the largest category of P&I claim in terms of both frequency and cost and the core purpose of the PEME programme is therefore to assist participating ship managers in reducing the incidence of claims caused by pre-existing disease or other medical disorders. The UK Club’s programme is highly developed and now provides participating members seafarers with access to a large network of accredited clinics which are held accountable to both the Club and the member.“

The UK Club was the first to launch PEME in 1996  The PEME programme has become one of the Club’s leading LP initiatives, inspiring others to invest in crew health programmes. The aim of the programme is to reduce crew illness claims which are caused by pre-existing disease or disorders. “Potentially an unfit crewmember could cause a major incident due to illness as his absence impacts on other crewmembers’ workloads’’ Sophia Bullard, PEME Director said. During 22 years of operation, 78 clinics in 26 countries have been approved, including an extensive network of US and Canadian clinics. Expansion of the clinic network is currently being considered in new areas within Europe and the Far East. The clinics liaise directly with the Crew Health team on aspects of crew fitness rather than with the manning agencies. The Club manages an online database of all crew medical records. This allows the Crew Health team to review statistics on nationality, causes of unfitness etc The UK Club has identified more than a thousand seafarer recruits with Hepatitis B, over a thousand cases of critically high blood pressure and in excess of 700 cases of pulmonary tuberculosis. Each of these cases could easily have resulted in a claim, the costs of which would have been significantly higher than the cost of the medical examination!

The UK P&I Club attracted the most votes by the end of the voting period which held online during a two-month period. SAFETY4SEA Awards are held annually within the scope of awarding industry’s outstanding practices for Excellence, Sustainability, Training, Technology, Initiative and Leadership. Other winners of the 2018 SAFETY4SEA Awards are: Norbulk Shipping UK Ltd for the Dry Bulk Operator Award, Arcadia Shipmanagement Co.Ltd for the Tanker Operator Award, Maritime Anti-Corruption Network (MACN) for the Sustainability Award, Inmarsat for the Technology Award, CSMART for the Training Award and Capt. Panagiotis Tsakos for the Leadership Award.

Find photos from the awards ceremony at Flickr and explore more about the nomination & voting procedure and the winners of 2018 SAFETY4SEA Awards at https://events.safety4sea.com/2018-safety4sea-awards/