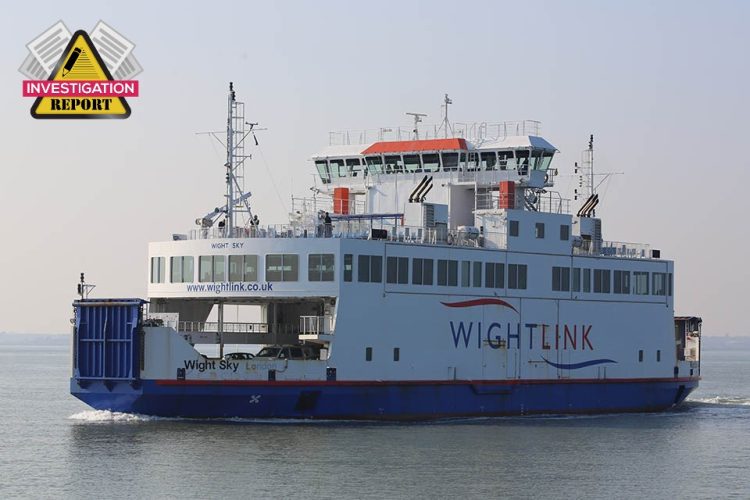 UK MAIB published its report on the two catastrophic engine failures, one resulting in a fire, on board ro-ro passenger ferry Wight Sky.

As Wight Sky approached the entrance to Lymington River, it waited for the outbound ferry, Wight Light, to clear the river. The bridge team reduced the pitch on the VSPs and used them to hold position and stem the wind and tide.

At 1840:52, Wight Sky’s machinery monitoring system identified a loss of ME2 lubricating oil pressure and initiated an engine shutdown. Within 2 seconds, ME2’s low piston cooling oil pressure and shutdown common alarms activated. At 1841:55, the engine failed catastrophically, causing internal engine components to be thrown through the engine crankcase into the engine room. The oil and vapours released from the crankcase into the engine room ignited and created a fireball around the engine (Figure 3) that activated the fire detection system alarm on the bridge. The master looked at the engine room’s closed-circuit television (CCTV) monitor, saw the smoke and fire, took immediate action to ensure the engine had declutched and stopped, and activated the engine room’s water mist fire suppression system, which extinguished the fire.

The crew were quickly mustered, the passengers assembled, and the coastguard alerted. The master informed the coastguard that the fire appeared to be out and that his intention was to continue into Lymington under the vessel’s own power. He requested the attendance of the Fire and Rescue Service (FRS). The crew
monitored the bulkhead and deck temperatures in the compartments around the forward engine room and rigged hoses for boundary cooling.

Shortly after the master made the decision to proceed to Lymington, black smoke began issuing from ME2’s engine room funnel. The chief engineer advised the
master to declutch and stop ME1 as a precaution because it was in the same engine room as ME2. The master followed the chief engineer’s advice and decided to abort the entry and return to Yarmouth, where Wight Sky could use its one available VSP to safely berth without assistance.

In parallel with ME3, ME4 was started and clutched in and the vessel headed back across the Solent towards Yarmouth. At 1911, Wight Sky was berthed alongside the ferry terminal. The FRS boarded the ferry and the passengers were disembarked via the side door. The vehicles were disembarked once the FRS confirmed it was safe to do so.

The initial ME2 inspection identified that the engine’s number four cylinder connecting rod had failed and been ejected through the side of the engine crankcase, and that a localised fire had ensued. The engine had accumulated 2241 running hours since its installation and, as the failure mode appeared identical to the previous ME2 failure, the MAIB began a new investigation.

At 0640, Wight Sky entered Lymington River with all three engines operating at the intermediate speed setting of 1360rpm. At 0655:48, with the ferry about 50m from its berth, an ME4 common alarm sounded. The chief engineer, who was in the machinery monitoring room (MMR) on the main deck, acknowledged the alarm and checked the engine’s operating status on the machinery monitoring system. The chief engineer noted that the lubricating oil pressure was lower than expected but was within its alarm limits.

The master raised the fire alarm and requested FRS attendance on berthing; the passengers were informed of the situation and kept updated. The vessel’s fire party mustered on the main deck and rigged fire hoses for boundary cooling. On his return to the MMR, the chief engineer noted that ME4 was still running and asked the master to declutch and stop the engine from the bridge. He then transferred the electrical load onto the forward diesel generators and shutdown the aft generator. The aft engine room remained sealed and crew monitored its boundary temperatures; the forward fire pump was started in preparation for boundary cooling. A few minutes later, the vessel successfully berthed at Lymington and its passengers and vehicles were quickly disembarked. The FRS boarded and confirmed there was no fire.

The initial inspection of the engine room identified that ME4 had failed catastrophically and that its number four connecting rod and gudgeon pin had been ejected through the side of the engine crankcase (Figure 6) into the engine room. The engine room was unoccupied at the time and there was no evidence of a fire.

On 26 August 2018, Wight Sky’s ME2 failed catastrophically as the ferry was about to enter the Lymington River. The engine was running at full speed (1800rpm) and was driving the forward VSP unit in parallel with ME1 when its ECU detected a loss of lubricating oil pressure and initiated an engine shutdown. 63 seconds later, the engine’s number four connecting rod and piston assembly was thrown out of the crankcase into the engine room. The engine had accumulated 2241 running hours and had been installed 11 months earlier as a new build replacement for an engine that had sufered a similar catastrophic failure.

Evidence was found of water ingress and impact loading damage in number four cylinder. The damage could potentially have been the result of coolant leakage
leading to the cylinder becoming hydraulically locked at the time of failure. However, like Wight Sky’s previous ME2 failure, the engine’s number five main journal bearing shells were found to have turned in their housing. This would have blocked the lubricating oil supply to the main journal bearing and number four connecting rod crankpin. Coupled with the extent of the heat and wear damage caused to the crankshaft journals, this clearly indicated that the engine failed due to a sudden loss of lubricating oil.

The circumstances that led to the main journal bearing shells turning through 180° were less clear and several factors that could have contributed to this were
examined. These included:

On 14 December 2018, Wight Sky’s ME4 failed catastrophically after 389 running hours. The ferry was about to berth alongside at Wightlink’s Lymington Harbour ferry terminal and the engine was running at its intermediate speed setting of 1360rpm and independently driving the aft VSP unit. Like Wight Sky’s ME2 failures, the engine’s number four connecting rod was thrown from the crankcase into the engine room.

Although the consequences of the ME4 failure had similarities with Wight Sky’s previous ME2 failures, the event was found to be the direct result of an assembly
error at Volvo Penta’s factory in Sweden. The engine’s number four and five connecting rod big end bearing caps had been inadvertently transposed during the
engine’s assembly. This meant that the mating surface between the connecting rod and its cap did not match. This would have significantly reduced the amount of metal-to-metal contact and increased the risk of fretting wear due to the oscillating forces imposed during engine running. This in turn would have progressively reduced the tension in the big end bolts and rapidly accelerated both the securing arrangement loosening and fatigue failure processes.

The engine build technician that assembled Wight Sky’s ME4 was an experienced Volvo Penta technician who had performed the task of installing the piston and connecting rod assemblies many times. It was evident that he must have made a simple skill-based error, probably due to a lapse in concentration or some form of distraction. Volvo Penta’s internal investigation was unable to determine why the technician made such a basic error. However, the engine manufacturer’s investigation identified that the serial numbers on the connecting rods and caps were not routinely checked to ensure that they matched following assembly. To mitigate the risk of similar errors, Volvo Penta introduced an improved method of identifying and matching the connecting rods into its production process.

Wight Sky’s ME2 failed catastrophically due to a sudden loss of lubricating oil supply to its number five main journal bearing and number four crankpin.

The oilway to the main journal and crankpin was blocked of when the bearing shells turned in their housing. Poor fuel combustion, the presence of silica sand and other abrasive particles embedded in the main bearing shells, engine misalignment, high levels of vibration, and contaminated lubricating oil might all have contributed to the event failure.

Wight Sky’s ME4 failed catastrophically because of an assembly error during build at Volvo Penta’s factory in Sweden. Two of the engine’s matched connecting rod big end bearing caps had been transposed during the engine assembly process.

The transposition of the bearing caps reduced the metal-to-metal contact between surfaces of the connecting rods and their bearing caps. This would have caused fretting wear between the mating faces, which would have led to loosening and rapid failure of the end cap securing bolts.

Four of the five catastrophic engine failures discussed in detail in this report failed suddenly because of a loss of lubrication supply to the engines’ crankshaft journal bearings and crankpins.

The operation and maintenance of Wightlink’s main engines was not being managed effectively, and many of its engineering crew were not recording tasks they had performed, or engine fluid test results on the company’s electronic integrated management system.

Wightlink Ltd is recommended to:

Volvo Penta AB is recommended to:

Lloyd’s Register is recommended to:

RK Marine Ltd is recommended to: