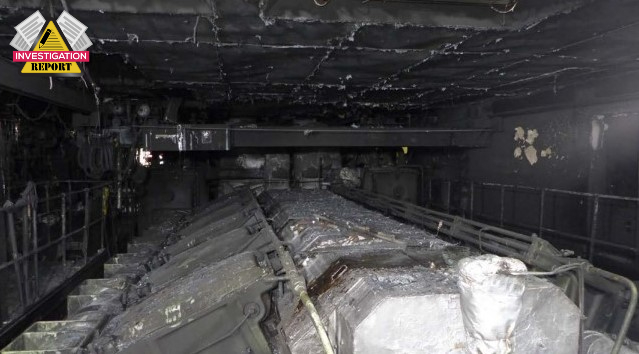 UK MAIB published its report on Finlandia Seaways, which on 16 April 2018 sufered a catastrophic main engine failure that caused serious structural damage to the engine and a fire in the engine room.

On 16 April 2018, Finlandia Seaways’ main engine was started in preparation for leaving port. On duty in the engine room were the chief engineer (C/E), second engineer (2/E) and an electrician. The vessel’s relief C/E was also in the engine room. At 1510, engine control was passed to the bridge and, at 1545, the vessel departed Zeebrugge on passage to Rosyth, Scotland. At 1600, the on watch 2/E was relieved by the third engineer (3/E) and the former left the engine room.

At 1610, the vessel cleared Belgium’s 12nm coastal limit and the engineers began to change over the engine fuel supply from low sulphur marine diesel oil to heavy fuel oil. This was completed at 1642 and, by 1800, the C/E, relief C/E and electrician had all left the engine room. The on watch 3/E monitored machinery operating parameters from the engine control room (ECR) and undertook hourly inspection rounds of the engine room.

At about 2000, the 3/E left the ECR and commenced his hourly rounds of the engine room and machinery spaces. Shortly after entering the purifer room, he heard loud metallic knocking sounds coming from the engine room. At the same time, powerful vibrations were being felt on the bridge by the ofcer of the watch (OOW), who immediately checked the propeller pitch angle and main engine speed gauges. The OOW saw that both gauges were fuctuating and immediately reduced the propeller pitch from 60% to 25%. He then saw that the fuel consumption meter was also fuctuating and giving abnormal readings, while various engine warning lights were illuminated.

The 3/E opened the purifer room door, looked out into the engine room and saw smoke rising from the port forward end of the main engine. The noise and vibration levels rapidly increased and, sensing danger, the 3/E ran back into the purifer room and crouched behind one of the purifers. Almost immediately, at 2003, there was a loud bang and fames fashed past the open purifer room door and the space filled with thick black smoke. The ship blacked out, but within seconds the emergency generator cut-in and the emergency lighting came on. Despite this, the smoke in the engine room had reduced the 3/E’s visibility to almost nothing.

At 2013, the 3/E escaped from the engine room through the funnel casing weathertight door onto the upper vehicle deck (Figure 9). He then collapsed onto the deck, gasping for breath and struggling to see. The 2/E saw the 3/E collapse and went to help him. The 2/E radioed the bridge and informed the master that the 3/E required medical assistance. At 2015, on instruction from the master, the OOW contacted Humber Coastguard and requested a helicopter.

MAN’s inspection of Finlandia Seaways’ remaining small ends, and those of Botnia Seaways, confrmed that poor overhaul practices were the most probable cause of the A5 small end failure.

This investigation found that MAN’s guidance and recommended procedures for overhauling the connecting rod small ends had not been followed and the small ends had been damaged during the piston pin bush removal and ftting process.

In addition, there was a lack of appreciation by DSG or DFDS of the potential consequences of the stress raisers introduced during overhaul of the connecting rod small ends, and the damage was viewed as inconsequential when compared with the mass of metal that made up the small end.

Finally, Finlandia Seaways’ main engine connecting rods were class survey items, but LR was not informed of the damage caused to the small ends during overhaul, or that connecting rods had accumulated more running hours than recommended by the engine manufacturer.

The MAIB and Lithuanian Transport Accident and Incident Investigation Division have issued a combined recommendation17 on 27 July 2018 to MAN Energy Solutions and to Lloyd’s Register to:

Provide technical advice to DFDS on the actions the company should take to minimise the risk of a similar catastrophic engine failure on board Botnia Seaways, and any other vessel operators whose MAN engines might have been subjected to similar maintenance practices. 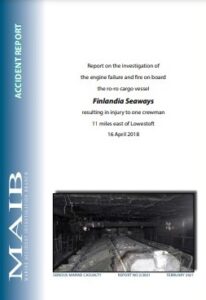