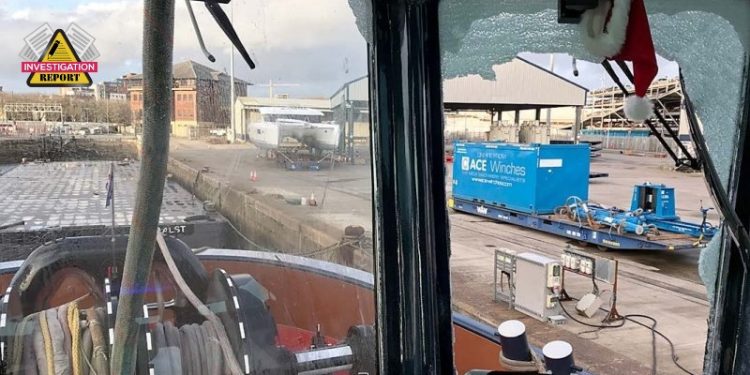 UK MAIB published its report on the failure of a towline pennant and injury to the crew on board the tug Svitzer Mercurius in Southampton, England on 22 December 2019.

On 22 December 2019, Svitzer Mercurius, along with the tugs Svitzer Ferriby and Svitzer Eston, was tasked to assist the ultra-large1 container ship CMA CGM Marco Polo up Southampton Water and on to its berth at Southampton Container Terminal (SCT); Svitzer Mercurius was allocated the role of stern tug.

At about 1100, the master, chief officer and chief engineer from the tug Svitzer Alma, who had been appointed to the new tug for the day, boarded Svitzer Mercurius at Ocean Dock, berth 45. At about 1115, Svitzer Mercurius’s Dutch master unberthed the tug and handed over the helm to Svitzer Alma’s master. Under the Dutch master’s supervision, Svitzer Alma’s master began manoeuvring evolutions to gain an appreciation of the tug’s capabilities. This included mooring it alongside on both port and starboard sides. Once complete, Svitzer Mercurius headed down Southampton Water to rendezvous with the inbound container ship.

As Svitzer Mercurius proceeded down Southampton Water, its master gave Svitzer Alma’s master permission to drive the tug during the towing operation. The Dutch master was aware of the local master’s experience and had seen him handle the tug.

At 1146, Svitzer Mercurius met CMA CGM Marco Polo of Netley shore and was manoeuvred into position to assume its role as stern tug and pass its starboard forward towline across to the container ship’s aft mooring deck. Once in position, the tug’s deck crew connected a heaving line received from the container ship to the starboard towline’s messenger line2. Up to 40m of towline was then run out from the starboard drum of the tug’s forward towing winch. The eye of the towline pennant3 was pulled up through the container ship’s centreline Panama lead and placed over a set of bitts immediately inboard. With its towline slack and its winch brake applied at 100% holding capacity, Svitzer Mercurius held station astern of CMA CGM Marco Polo as the container ship proceeded towards SCT Berth 5.

At about 1225, CMA CGM Marco Polo entered the turning basin adjacent to its berth at a speed over the ground of 3.7 knots (kts); Svitzer Eston was at the container ship’s bow and Svitzer Ferriby was on its port quarter (Figure 3). As the ship began to turn to port, the pilot requested Svitzer Mercurius to provide 50% astern thrust to slow the ship. Shortly afterwards, the pilot requested that Svitzer Mercurius increase the stern thrust to 100%. As the load on the towline increased, the tug’s winch brake slipped and a few metres of the towline were released. With full astern power being maintained, the line quickly became taut and the winch brake slipped a second time, with another several metres of towline being released.

At about 1231, after the winch had slipped a second time, the towline pennant parted close to CMA CGM Marco Polo’s deck and snapped back towards the tug. Part of the line struck and shattered the starboard forward wheelhouse window. It also struck the centre forward window, causing its inner pane to fracture.

Five crew who were stood in the wheelhouse (Svitzer Mercurius’s master, mate and chief engineer, and the Svitzer Alma’s master and mate) were struck by flying glass fragments and suffered multiple minor facial, arm and upper body lacerations. All of the crew were wearing some form of eyewear, which prevented any eye injuries. The rest of the wheelhouse was peppered with glass fragments and two of the inner panes of the aft-facing windows were also cracked but did not break. Svitzer Mercurius’s mate took control of the tug while the Dutch master went below to clean blood from his face. When the tug’s master returned to the wheelhouse, he took back control.

Examinations of the pennant identified damage in several locations along its length that could only have been caused before the tug’s arrival in Southampton. TTI’s report concluded that the load at failure was likely to have been equal to or less than the load recorded (119t) during its destructive tensile load test, which was about 52% of its original MBL.

It is possible that the pennant simply failed at a load equal to the tug’s maximum bollard pull. However, it is much more likely that it parted when the towing assembly was exposed to higher levels of shock loading following the brake slippage incidents. The strength of the entire towing assembly, including the recovered sections of pennant might have been reduced due to exposure to the shock loading, and therefore the tensile strength of the pennant could have been a little higher than 119t before its failure. Regardless, it was clear that the poor condition of the towline pennant and the debris on the towing winch band brake were the two primary factors that contributed to this accident.

The pennant had suffered mechanical damage to its outer jacket that would have been visually apparent and had been repaired. TTI’s examination and test report identified two main areas of damage to the rope’s load-bearing core that would not have been visually apparent and would have been difficult for the tug’s crew to detect. The types of damage found included core strand fusion and axial compression fatigue, both of which were attributed to previous high and/or shock loading exposure.

Although no towline load history information was available for Mercurius, both direct and indirect towage were known to have taken place during the vessel’s time in the Netherlands, potentially with loads of around 160t (twice the bollard pull). These loads exceeded the rope manufacturer’s guidance and Svitzer’s policy regarding a WLL of 50% of the MBL (115t) and therefore should have been recorded as overload events. Given the extent of the repairs carried out to the pennant and the knowledge that it had been exposed to shock loading, a robust LMP might have allowed Iskes to identify that the rope had reached the end of its safe operating limits, and led to a decision to discard it rather than end-for-end it.

Not enough consideration was given to the towlines and pennants fitted to Mercurius when it changed ownership, including whether the individual components were suitable for the intended purpose and their fitness for continued use. The result was that Svitzer Mercurius started operating in Southampton with a starboard winch towline pennant that was no longer fit for purpose due to its reduced residual strength from the shock loading and wear sustained under its previous ownership.

Without a detailed inspection by the manufacturer, or a load test, it would have been impossible to determine the extent of the damage to the load-bearing core of the pennant and the consequent reduction in strength. As pennants are not always able to be suitably examined and/or load tested, they should be replaced frequently and certainly after damage or high loads have occurred.

Svitzer Mercurius’s wheelhouse toughened glass windows were unable to withstand the high energy impact load of a towline snapping back and shattered, showering the wheelhouse in glass fragments. More severe injuries to the crew in the wheelhouse were only prevented because they were wearing glasses or sunglasses.

It is apparent that there is a lack of a suitable glass standard for tug wheelhouse windows that provides a measurable level of crew safety against the hazard of a recoiling towline.

Although the risk of a towline failure and its subsequent snapback was recognised and understood, the likelihood and consequence of a recoiling line striking the wheelhouse windows had not been assessed.

The thorough documented inspection process, in accordance with Svitzer’s procedures, for the Mercurius’s induction into the Svitzer feet did not occur. As a result, the suitability of the towline arrangement, and condition of the winch brake and pennant, were not identified.

The starboard winch brake was contaminated because it had not been effectively maintained after arrival in Southampton, leading to the winch brake slipping at almost half its intended holding capacity and causing a high shock load on the towline and pennant.

Without a clear formal induction process for new crew, and given acting as stern tug to CMA CGM Marco Polo was the first job with the towline and pennant under load in Southampton, if Svitzer Mercurius’s master had remained at the helm it would have maximised the opportunity to react to unexpected events.