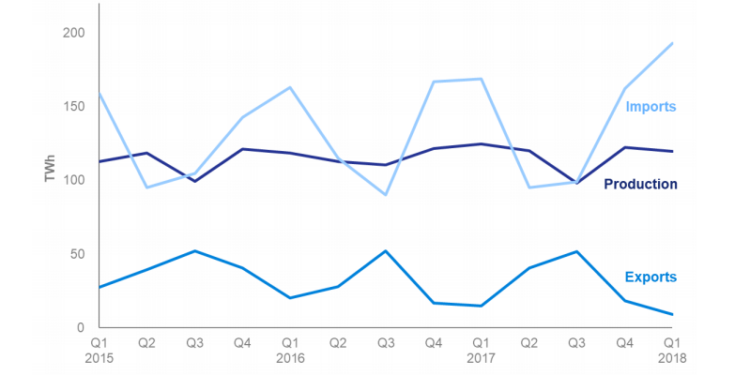 In its Energy Trends report for Q1 2018, the UK Department of Business, Energy and Industrial Strategy reveals a record high for gas imports in the first quarter of 2018, but a decrease in LNG imports by 14% which and now account for only 9% of total imports.

The long-term picture shows that the average availability of gas over 4 rolling quarters has been gradually rising since the start of 2015 reaching volumes close to 2012/2013 levels in 2017, after figures had decreased in 2014.

The UK imports natural gas primarily from Norway (predominantly via the Langeled, Tampen Link and Gjoa/Vega pipelines). Smaller volumes are imported from Belgium (via the UK-Belgium Interconnector) and the Netherlands (via the Balgzand to Bacton line). Net imports during Q1 2018 reached a high of 184 TWh, a record level for any quarter and up 1/5 on last year.

While exports dropped sharply (down 40%) total imports reached the highest levels of the first quarter of any year, increasing by 14% on the same period in 2017 to meet strong demand. Pipeline imports were up by 18%, with imports from the Netherlands and Belgium both more than doubling (and a decrease in exports to these countries drove the 40% fall as pipelines were used to supply the UK).

Imports of LNG decreased by 14% on Q1 2017 and now account for only 9% of total imports as volumes remain muted. LNG ‘reloads’ started in late 2014 and have continued since with the UK exporting to countries including Brazil, Pakistan and the United Arab Emirates.

The majority comes from Qatar, accounting for 86% of LNG imports in Q1 2018, although January 2018 saw the arrival of the first LNG cargo to enter UK supply from Russia. Russian LNG accounted for less than 1% of imports over the last three months.