Above image is used for illustration purposes only / Credit: HRAS

The Marine Management Organisation (MMO) launched its UK Sea Fisheries Statistics 2018, providing details on the British fleet, the number of fishermen, the quantity and value of UK landings, international trade, worldwide fishing and the state of key stocks.

Also, the report adds that the quantity of sea fish landed by British ships lowered by 4%, whereas the value of landings rose by 1% in value, compared to 2017.

The UK fishing fleet remained seventh largest in the EU in terms of vessel numbers, with the second largest capacity and fourth largest engine power. Moreover, 74% of the quantity landed by the UK fleet was caught by vessels over 24 metres in length which accounted for 4% of the total number of UK vessels.

In line with the UK fisheries statistics, a report launched in August focused on the turnover of the UK fishing fleet, which was close to £1 billion in 2018, a very similar figure to 2017. 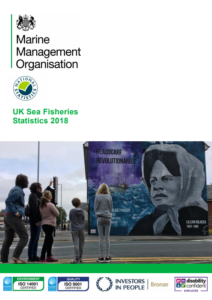