The UK and EU struck a deal on Brexit, on Thursday morning, October 17, now waiting for the British parliament's vote, with the UK Chamber of Shipping welcoming the agreement and ensuring that they will continue to trade freely with its European partners.

As the developments show, the UK and the EU are seeing eye to eye on the Brexit developments and the former's exit from the EU.

Jean-Claude Juncker, European Commission president tweeted that the deal that was agreed is a fair and balanced agreement for the EU and the UK and it is testament to their commitment to find solutions. 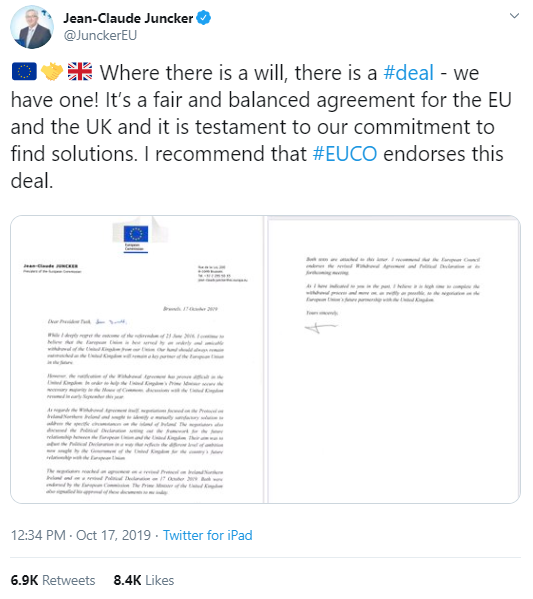 Following, the UK's Prime Minister, Boris Johnson, insisted that the UK will exit the Union as already settled, October 31, and urged MPs to unite and accomplish the deal.

In light of the developments, the UK Chamber of Shipping stated that

We broadly welcome the agreement reached by the European Union and UK Government. This deal provides the basis for a negotiated settlement with a transition period, something we have long called for.

The Chamber of Shipping added that there's more to agree on the future of trade deals and they will continue closely collaborating with the UK Government, and the EU, to ensure that the world class shipping industry can continue to trade freely with its European partners.

On the other hand, the Democratic Unionist Party opposed to the agreement stating that the deal is not beneficial for the well-being of Northern Ireland. Recently, the Prime Minister launched the 'Two borders four years' plan, according to which Northern Ireland will leave the EU when the UK does on October 31, but will continue to follow single market rules for agriculture and industrial goods, a deal to which BPA opposed to.