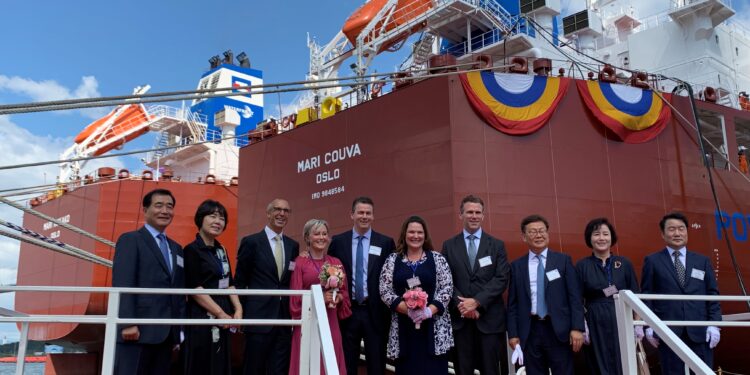 The Methanol Institute announced that it has welcomed the launch of two new dual-fueled tankers capable of operation using clean-burning Methanol. Namely, the 49,000dwt product tankers Mari Couva and Mari Kokako were named on August 16.

In addition to these ships, another two vessels will be joining the Waterfront fleet before the end of the year, owned by NYK and Mitsui/IINO Kaisha and chartered to Waterfront Shipping.

The new tonnage will join the seven existing dual-fuel tankers operated by Waterfront Shipping, which have recently achieved 50,000 hours of trouble-free operations on Methanol as fuel.

The launch of the Mari Couva and Mari Kokako is a milestone for the acceptance of Methanol as a safe and reliable marine fuel that can meet IMO2020 regulations and create a pathway to lower carbon shipping. The fact that the new ships feature more efficient engines capable of achieving IMO NOx Tier III compliance with no further modification demonstrates that this is a technology that is moving forward consistently

According to the Methanol Institute, interest in the use of Methanol as marine fuel has continued to grow in recent years, with several research projects completed or in progress to investigate the suitability of marine fuel across multiple vessel types.

The investment in these vessels is a perfect example of companies looking to explore innovative ways to meet global emission requirements for the marine sector, something which continues in vessel demonstration programs in Europe, China and Singapore. We expect the implementation of the IMO2020 regulations to further increase interest in Methanol as a marine fuel that can deliver cost-effective compliance