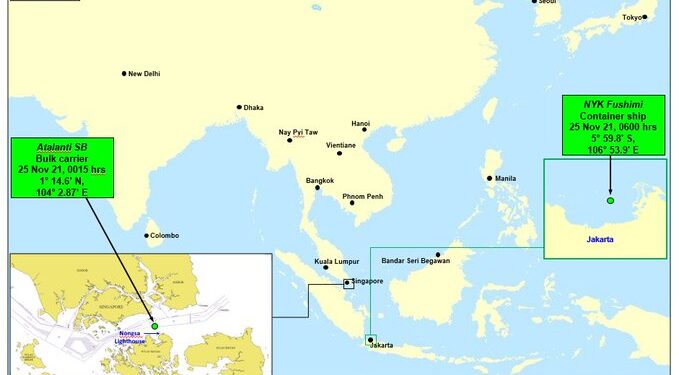 During 23-29 Nov 21, two incidents of armed robbery against ships in Asia were reported to the ReCAAP ISC. Both were CAT 4 incidents, and occurred on 25 Nov.

Of the two incidents, one incident occurred on board a container ship while anchored at Jakarta Anchorage, Indonesia.

The other incident occurred on board a bulk carrier while underway in the Singapore Strait at approximately 3.1 nm north west off Nongsa Light House, Batam, (Indonesia) in the eastbound lane of the Traffic Separation Scheme.

In the incident at Jakarta Anchorage, a broken padlock of the steering room was discovered by the crew, and engine parts were reported stolen. In the incident that occurred in the Singapore Strait, nothing was stolen from the ship and the perpetrators escaped immediately when the alarm was raised The crew was not harmed in both incidents.

As informed, with the latest incident, a total of 39 incidents were reported in the Singapore Strait since January 2021, including 24 incidents occurred off Tanjung Pergam, Bintan Island (Indonesia).

Among others, ReCAAP ISC is concerned with the non-reporting of incidents of armed robbery against ship to the nearest coastal State.

In fact, in November 2021, there were two incidents of armed robbery against ships at Batangas Anchorages (the Philippines), but the masters of both ships did not report the incidents to the Philippine authorities despite requests of the authorities. Non-reporting of incidents by ships have occurred also in the waters of other coastal States.

In light of the situation, ReCAAP ISC issued an Advisory to remind the masters of ships and shipping companies the importance of making immediate reporting of incidents to the nearest coastal States, in accordance with the IMO MSC.1 – Circular 1334 on ‘Guidance to shipowners and ship operators, ship masters and crew on preventing and suppressing acts of piracy and armed robbery against ships’.

The paragraph 11 of the Circular states: “It is therefore recommended that in the event of an occurrence, master should report all actual or attempted attacks of piracy and armed robbery or threats thereof, to: (i) the nearest RCC or regional piracy focal point where applicable (e.g. ReCAAP ISC in the Asian region).”

The reporting of incidents also enables the authorities to step up surveillance in the vicinity, which deters the perpetrators from repeating attacks on other ships in the area.

On the other hand, the ReCAAP ISC recommends that the law enforcement agencies to enhance surveillance, increase patrols and respond promptly to incidents reported by ships, in order to arrest and prosecute the perpetrators.