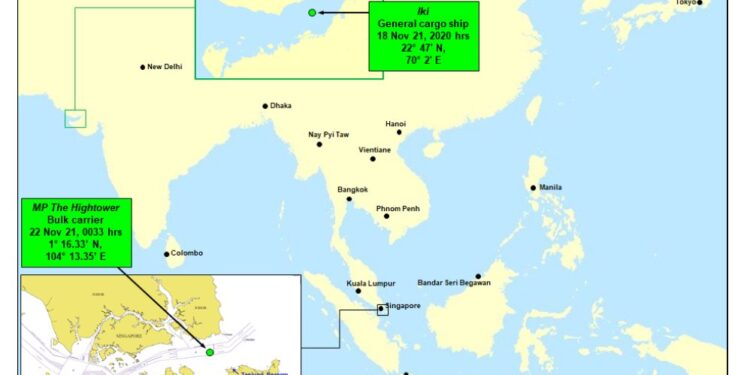 During 16-22 Nov 21, two incidents of armed robbery against ships in Asia were reported to the ReCAAP ISC. One incident occurred while the cargo ship was anchored at Kandla Anchorage, India. The other occurred while the bulk carrier was underway in the Singapore Strait.

In both incidents, the crew was not injured, nothing was stolen from the ships and the perpetrators escaped immediately when the alarm was raised.

With the latest incident, a total of 38 incidents were reported in the SS since January 2021, including 24 incidents occurred off Tanjung Pergam.

During 16-22 Nov 21, one incident outside Asia was reported to the ReCAAP ISC by ReCAAP Focal Point (Singapore). The incident occurred on 12 Nov to a tug boat/supply vessel while anchored at Soyo Outer Anchorage, Angola.

To remind, ReCAAP ISC recently issued its montly report for October 2021, summarizing that the total number of incidents of armed robbery against ships in Asia from January to October 2021 has decreased compared to the same period in 2020.