In its weekly report for 13-19 October, ReCAAP ISC informed of two incidents against ships in Asia. Both incidents occurred onboard ships while they were underway in the eastbound lane of the Traffic Separation Scheme (TSS) in the Singapore Strait.

Both incidents were classified as CAT 4 incidents, where the perpetrators are not armed and the crew not harmed.

With these two incidents, a total of 25 incidents have been reported in the SS since January 2020.

The first incident involves the Liberian-flagged bulk carrier ‘Ian M’, while approximately 5.9 nm north of Tanjung Pergam, Pulau Bintan, Indonesia in the eastbound lane of the TSS in Singapore Strait.

While underway and en route to Ruizhou, China, three perpetrators were sighted in the engine room. The alarm was raised.

The crew conducted a search onboard, with no further sighting of the perpetrators. There was no confrontation between the perpetrators and crew. A lifebuoy and some welding rods were stolen.

The master reported the incident to Singapore Vessel Traffic Information System (VTIS) and confirmed that no assistance was required. A safety navigational broadcast was initiated. The Republic of Singapore Navy’s Maritime Security Task Force (MSTF), Singapore Police Coast Guard, and the Malaysian and Indonesian authorities were notified.

While underway, three perpetrators were sighted in the engine room. The crew was alerted and a search was conducted onboard the ship, with no sighting of the perpetrators.

The master reported the incident to Singapore Port Operations Control Centre (POCC) and concluded that the perpetrators had escaped undetected.

There was no injury to crew and nothing was stolen. The Malaysian and Indonesian authorities were notified. 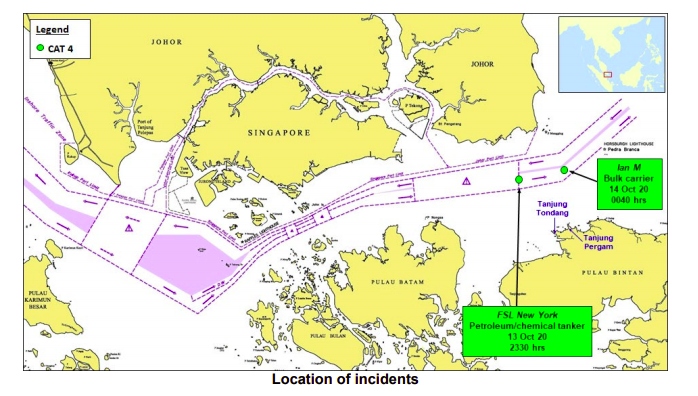 During the same period, two incidents outside Asia were reported to the ReCAAP ISC by ReCAAP Focal Point (Singapore) and ReCAAP Contact Point (Hong Kong).

The first concerns the Hong Kong-flagged tanker ‘PTI Nile’, while underway off Togo. While underway, perpetrators armed with guns approached the ship in more than two speed boats. The ship engaged in zig zag movement to delay boarding while all 21 crew locked themselves in the citadel.

The incident was reported to the Togo Navy, who deployed a military operation boat that arrived at the location on 18 Oct at about 0800 hrs.

With the arrival of Togo Navy, all crew came out of the citadel unhurt. The ship walkie talkie, a laptop and a mobile phone were stolen.

The second involves an unidentified petroleum/chemical tanker, while at Conakry Anchorage, Guinea.

The crew stepped up vigilance during the ship’s stay at the anchorage by hardening the deck with razor wires, securing all doors and arranged extra lookouts.