by Capt. VS Parani
in Opinions, Uncategorized

Above image is used for illustration purposes only / Credit: Shutterstock / Photo by: corlaffra

Captain VS Parani, author of the Golden Stripes- Leadership on the High Seas, shares lessons learned from two different groundings which occured due to similar failures, highlighting once again the importance of safety culture onboard. As Capt. Parani notes, ‘a good safety culture doesn’t just happen’; thus a strong leadership strategy is essential to improve communication and reiforce decision making at sea.

In February 2015, while on passage from Belfast to Skogn, Norway the general cargo vessel Lysblink Seaways ran aground at full speed, near Kilchoan, West Scotland.

The Lysfoss ran aground in 2001, under similar circumstances while on passage from Lysekil in Sweden to Belfast.

The first three alphabets of the two ship’s names are the same. So, are their groundings a coincidence?

Not when you consider that the UK MAIB found that the ships shared a similarly deficient safety culture. The findings indicated that the shortcomings identified with the Lys Line safety culture in 2001 were still prevalent on Lysblink Seaways at the time of the accident, despite the change of ownership.

But how can we explain the concept of safety culture to seafarers?

Models help us understand abstract concepts. And if it’s based on something familiar, even better. That’s why in my book Golden Stripes- Leadership on the High Seas, under the section Safety Leadership, I’ve explained the concepts of   safety management and safety culture through the Safe-Man model – based on the popular Pac-Man game. 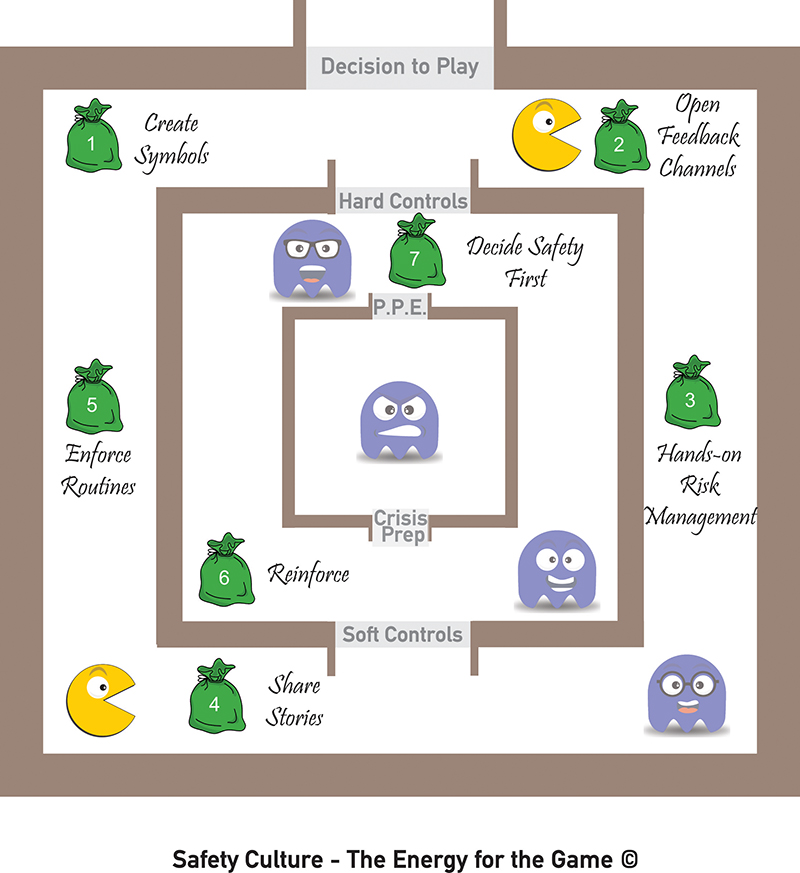 Imagine yourself and your shipmates as Safe-Men (Safe-Man 1 and 2). The game is to fulfil a task, such as navigating through a narrow channel, carrying out a crank-case inspection, or hot-work in a tank. Implementing all the safety management barriers such as checklists, use of required equipment help us work in the ‘Safe Zone’, where the risks are reasonably low.

Now, three of the devils (Hazard, Risk, and Accident) are locked under barriers, while one (Unexpected New Hazard) roams free trying to catch you by surprise. Throughout the game you also watch out for the other members of your team. Because if any of the devils catch even one of your crew or ships (Safe-Men), the game ends.

The game also has power pellets, or energizers which once eaten by Pac-Man weaken the devils while gaining him more points. Similarly, a robust safety culture is the energiser which helps the Safe-Men carry out their tasks every day, while keeping dangers at bay.

Like all good things in life, a good safety culture doesn’t just happen. It requires intentional leadership to create, maintain, and inspire such a culture. In fact, every member of the team should feel enthusiastic, even overzealous, about their safety culture. This is where safety moves from the realm of safety management to safety leadership.

Here are my seven leadership strategies for a strong safety culture:

On the Lysblink Seaways, the Chief Officer had consumed half a litre of rum before his night navigation watch. He fell asleep and missed an alteration of course. The ship grounded on a rocky shore at a speed of over 13 knots. The ship was later declared a total loss. Though this may seem like the reckless act of an individual, the investigation report found that there were systemic failures in safety leadership.

An earlier audit had found that the navigators had not renewed their 5-yearly Bridge Resource Management Training as required by the Flag-State rules. A Flag State recommendation required another crew member to be placed as a look-out during darkness hours but this was not done. On this ship, it had become regular practice to disregard the company procedure of using the dedicated ‘dead-man’ alarm system. The ‘enforce routines’ power-pellet was never used, weakening the safe-man’s ability to play the game.

Random alcohol tests were never carried out on this ship. These ‘feedback channels’ were not utilized. The significant consumption of alcohol by the crew from the ship’s bonded stores was not flagged by the company. Many of the findings regarding the implementation of the safety-management manual which came to light after the accident should have been identified during routine internal audits. The ‘reinforce’ energizer was not used effectively.

On the Lysfoss, detailed passage-plans and master-night-order book were not used, which otherwise are powerful ‘symbols’ of a working safety management system.

The investigation report also found that the master’s familiarity with the navigation routes had caused him to adopt a relaxed attitude to the proximity of navigational dangers. ‘Hands-On risk management’ and safety leadership was lacking.

Research shows that workplaces with a healthy culture are 49% less likely to have accidents and 60% less likely to make errors in their work. Help your colleagues understand how safety culture provides us the energy to work safely, day after day. Feel free to use the Safe-Man model to explain how it works. Do remember that poor safety culture can ground a ship- maybe even two.

Captain VS Parani, FNI, FICS, CMarTech-IMarEST is currently HSSEQ Manager at Tufton Asset Management Ltd., Cyprus. He is also the author of Golden Stripes – Leadership on the High Seas and producer of the GoldenStripes Podcast. He can be reached at www.parani.org