In its weekly report for 14-20 July, ReCAAP ISC informed of two incidents of armed robbery against ships in Asia. Of the two incidents, one was a CAT 3 incident onboard an offshore supply vessel while anchored at Kakinada, India. The other was a CAT 4 incident involving a tanker in Manila anchorage, Philippines.

The first incident involves the Singaporean offshore supply vessel MWV Falcon. While at anchor at Jetty No NRW-3, Kakinada, India, on 16 July, the duty AB sighted one perpetrator opening the generator door and trying to steal generator equipment using a spanner. The perpetrator was also armed with a knife.

Immediately, the AB reported the incident to the bridge. Then, the perpetrator fled by jumping into the water.

A search onboard the ship found one fire hose box open. Nothing was stolen and there were no injuries.

Probably, the perpetrator had climbed on the jetty fender from under the quay side bridge to enter the ship which was a blind spot on the main deck of ship. The Kakinada Port control was informed. 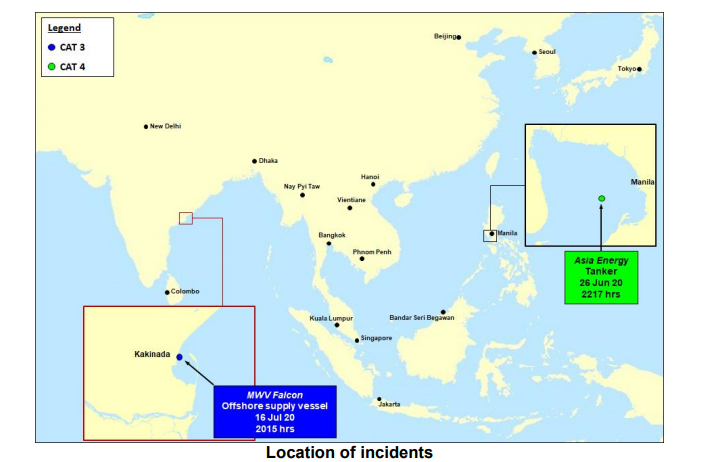 The second incident involves the Bahamas-flagged tanker Asia Energy. While at anchor in Manila Anchorage, Philippines, on 26 June, the crew noticed four perpetrators on the forecastle of the tanker.

The perpetrators jumped overboard when the crew sighted them.

The master immediately reported the incident to VTMS Manila.

Perpetrators stole three immersion suits and two fire hoses. There were no injuries.