Tug capsizes due to lack of training and oversight

The Transportation Safety Board of Canada discusses a capsize incident, where the George H Ledcor was towing another barge and resulted to the former's capsize.The event resulted to a seriously injured crewmember and an unknown quantity of oil spill.

The George H Ledcor, on August 13, 2018, was towing the loaded gravel barge Evco 55, with the assist tug Westview Chinook pushing to an unloading facility in the north arm of the Fraser River, British Columbia.

At about 2210 local time, the George H Ledcor girded and capsized after being overtaken by the barge. The 4 crew members on board were rescued from the tug’s overturned hull by the nearby yarding tug River Rebel and the assist tug Westview Chinook.

One crew member sustained a serious injury to his hand. The assist tug then towed the overturned tug and barge to a nearby tie up, where a pollution boom was deployed around the tug. An unknown quantity of diesel fuel was released as a result of the occurrence.

The TSB Canada provided information on the factors that may have played a role in the event.

Based on its causal analysis of the occurrence, Ledcor has taken the following safety action to prevent or reduce the likelihood of a similar accident:

Also, it added directions and procedures to the domestic safety management system in order to recognize and avoid girding situations, and added the location and function of the abort mechanisms to the vessel-specific familiarization requirements.

It held general crew meetings, conducted hazard analyses, and delivered a presentation to masters to raise awareness about girding and ensured that all masters discuss the use of the abort mechanism during safety drills, including when and how to activate the mechanism.

It instituted a 2-day training and familiarization program for all masters and mates using a vessel voyage simulator and classroom training to learn about girding situations and strategies to avoid them.

Concluding, Ledcor also installed additional abort mechanisms of a standard design in common locations throughout its fleet of tugs. The abort mechanisms are more visible, are illuminated, and have an audible alarm when activated. Ledcor is also in the process of ensuring that liferaft painter lines are of the recommended length for its vessels and operation. 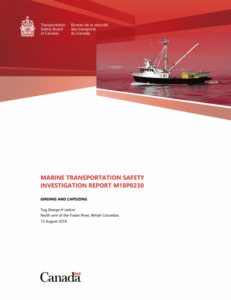