TSB Canada issued its investigation report on the injury during a lifeboat drill onboard the passenger vessel Amadea, while moored in Quebec, in September 2018. TSB found that manually overriding a winch system’s built-in safety feature and not wearing protective equipment contributed to the serious head injury.

On 09 September 2018, a crew member of the passenger vessel Amadea was seriously injured while stowing lifeboat No. 4 after a regular lifeboat drill.

At the time of the occurrence, the Amadea was berthed at section No. 21 in the port of Québec, Quebec. The injured crew member was transported to a local hospital by ambulance.

The investigation revealed that the injured crew member was not trained or familiarized with the task and was unaware of the risks and hazards associated with it.

The investigation also found that the onboard safety management system did not include training or any formal operating procedures on lifeboat recovery and stowage, or on operating the davit winches.

If crew members are not trained in the safe operation of critical shipboard equipment such as life saving appliances, there is a risk that they will not operate such equipment in a safe manner.

In regards to the equipment design, it was determined that if the design allows operators to override or disable its built-in safety features, these features will not function as intended, increasing the risk that the crew will be injured while operating this equipment.

See also: How to tackle head injuries on board

In addition, it updated the Amadea’s training manual so that it now includes a procedure for lifeboat recovery. This procedure specifies that crew members must wear protective headgear (helmet), gloves, and safety shoes while performing any activity involving lifeboat winches, davits and lashings. 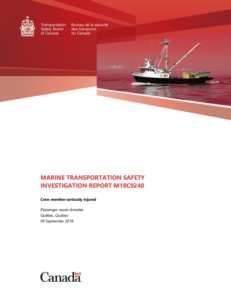