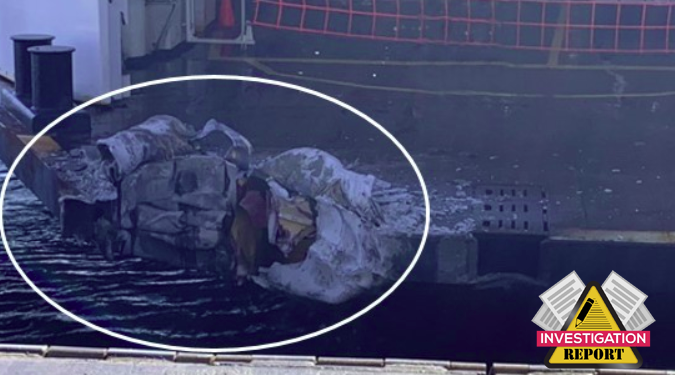 Damage to the vessel / Credit: BC Ferries, with TSB annotations

The Transportation Safety Board of Canada (TSB) issued an investigation report into the striking of a dock by the roll-on/roll-off passenger ferry ‘Spirit of Vancouver Island’ in Tsawwassen, British Columbia, in April 2020. The investigation identified gaps in the effectiveness of safety management.

On the previous day, the crew had experienced a situation where the vessel had departed Tsawwassen 9 minutes late despite having arrived on time. The Spirit of Vancouver Island was scheduled to depart berth 3 at 1700, allowing 15 minutes before the scheduled 1715 arrival of the next ferry to use berth 3.

At 1616, as the Spirit of Vancouver Island was approximately 3 nm off the outer dolphin, the bridge team notified the master and commenced the pre-arrival checklist. At this time, a deckhand went to the forecastle deck to stand by the anchors. The master arrived on the bridge at 1620 and took control of the vessel. The chief officer assumed the role of co-navigator.

At 1624, the vessel was approximately 0.25 NM from the outer dolphin, which is the command decision point (CDP)9 for Spirit class vessels approaching Tsawwassen. At the CDP, the master must make the decision whether to proceed with or abort the planned manoeuvre. With all machinery components operating satisfactorily, the master continued with the approach. Soon after, the master observed that the vessel was setting in the opposite direction to that expected.

To counteract this, the master ordered the helmsman to adjust the course further to starboard and steer at a point halfway down the wall of berth 3. A few seconds later, the master applied astern pitch to the starboard engine, while the port engine was maintained on ahead pitch. The speed of the vessel at the time was 13.9 knots. At 1625, the astern pitch on the starboard engine was increased to 70% and subsequently to 90%.

During the approach, the chief officer called out the vessel’s speed for the master twice and noted that the Spirit of British Columbia was resting against the wing wall to its port side, which indicated a northwesterly set in the vicinity of the terminal.

With the speed at 9 to 10 knots, the master ordered the helmsman to steer hard to port to control the bow. The vessel did not respond to the helm order, even after the ahead thrust on the port engine was increased, and the vessel continued moving forward towards the wall of berth 3.

At 1625, the master applied full astern on both engines and put the thrusters full to port in an attempt to avoid striking the wall. The vessel passed the outer dolphin at a speed of approximately 6.2 knots.

At 1626:32, the vessel struck the concrete abutment on the wall of berth 3 at a speed of approximately 5.4 knots. The master stopped the engines and thrusters, and the crew conducted a damage assessment. Although no warning was broadcast to notify passengers about the impending striking, no injuries were reported immediately following the occurrence; the next day, 2 crew members and 1 passenger reported minor injuries.

The vessel sustained damage to the deck plate, rubbing strake, and the forepeak tank above the waterline. The concrete abutment of the berth wall was also damaged.

The Spirit of Vancouver Island’s SMS was certified and audited by an approved authority. However, the investigation identified gaps in the effectiveness of safety management related to the guidance provided to crews regarding recommended vessel speeds and critical vessel operations (in this case, releasing an anchor), which was not well documented or understood by the crew,

Following the occurrence, BC Ferries completed a site investigation report and the following safety actions were taken:

-A 2-hour review session with the bridge team was held that includeda review of the incident;

-The anchor documentation and training manual were updated to clarify the anchor release method and all crews have been practicing proper stowage of the anchors on board Spirit-class vessels.

-The VSM was updated to include the major factors of a CDP in accordance with the fleet operations manual. Bridge teams have performed drills that address vessel speed and the elements of a CDP involving all bridge team members.

-Instructions on the remote release of the anchors were posted.