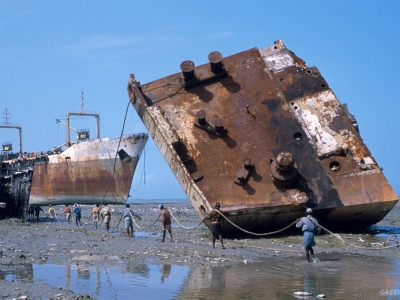 Vessels are now worth little more than their scrap value

Vessels are now worth little more than their scrap value

The downturn in shipping is hitting the industry so hard that some of the world's biggest vessels are now worth little more than their scrap value, new figures show.

Shipyards have been turning out new vessels at a pace designed to service global demand that has simply failed to materialise, meaning the industry is now sinking under massive overcapacity.

As owners have seen the rates charged to carry freight plunge, demand for their ships has collapsed to the point that selling them for scrap makes financial sense much earlier in a vessel's life.

In the worst hit sectors, the fall in the ships's value and the rise in the price of steel - driven by rapacious demand from China as it builds itself a new - means that the difference between the prices fetched if vessels are sold on to keep sailing and those if they are broken up for scrap is now minimal.

Cargo ships as a general rule are built to sail for 25 years, yet in the volatile VLCC or "very-large crude carrier" sector, which comprises the world's biggest oil tankers, scrap and resale prices reached parity in recent months for the average 15-year-old ship, according to prices tracked by industry information provider VesselsValue.com.

A typical 15-year-old VLCC achieved an average resale price of about $78m (49m) at the peak of the market in July 2008, its research shows. That figure has since plunged to $23m.

Adrian Economakis, lead research analyst at VesselsValue.com, said that ship prices have in the main been heading in only one direction.

"There was a bit of a 'dead cat bounce' in the middle of 2010 when there was a small recovery but the general trend has been quite horribly downward," he said. "From the second half of 2010 to today, it has looked like a ski slope."

Meanwhile, the same ship's scrap value has moved in the opposite direction, climbing sharply in recent years. From a low of $12m back in June 2009, when the scrap market was at its worst, the same VLCC ship would now achieve close to $20m if its was sold for its metal.

While that is not the $31m it could have achieved back in 2008, when combined with the slide in resale values, it does signal that the gap between scrap and "floating" prices has narrowed markedly.

Many ship owners, however, are refusing to scrap their ships in the hope of a shock which could resuscitate the market - perhaps some global upheaval which would push up rates against a backdrop of broadly flat global demand for oil.

A serious flare-up around Iran, for example, still at loggerheads with the West over its nuclear ambitions, could boost the VLCC market, as the disruption to oil supplies would require ships to carry fuel further around the world.

Admittedly, there are differences in performance throughout the shipping industry, with the market for smaller "medium range" tankers, which carry refined oil products, holding up better than that for the super-sized crude carriers. But nor is the problem confined to VLCCs.

A similar oversupply of container vessels operating on the Asia to Europe trade lanes has pushed freight rates to "unsustainably low levels", operator Maersk Line warned earlier this year, as it announced it was taking 9pc of its capacity on the route out of service.

More cutbacks and rebalancing will be needed to put the industry back on a sustainable path, observers warn, since a flurry of new ship orders placed in 2008 means that a large amount of vessels are expected to enter world fleets this year and the next.

The downturn is also being compounded by funding issues as banks, under pressure to boost their own capital buffers, pull back from financing, notes rating agency Fitch. It expects impaired loans and impairment charges relating to ship finance to continue at heightened levels or even "increase somewhat". Fitch's estimates show that Lloyds Banking Group has already reduced its exposure to shipping from around 1.5 times its total equity in 2008 to just 50pc-75pc currently.

Little reason for cheer lies ahead, according to Fitch, which expects the industry's overcapacity to continue until 2014, when increased scrapping rates, shrinking ship order books and an improvement in global demand should bring the market closer to equilibrium.

"Our perception now is it should start improving in 2014, for two reasons," said Jens Hallen, an analyst at Fitch. "On the one side, we expect that the new number of ships coming into the market is reducing, [so] effectively you have a lower supply of ships. Equally important is that world demand and trade globally will start picking up."

In the meantime, the only people who might benefit are those willing to take a risk on a very shaky looking market.

"There's a lot of people losing a lot of money and people going bankrupt, so the vultures are circling," said Mr Economakis.