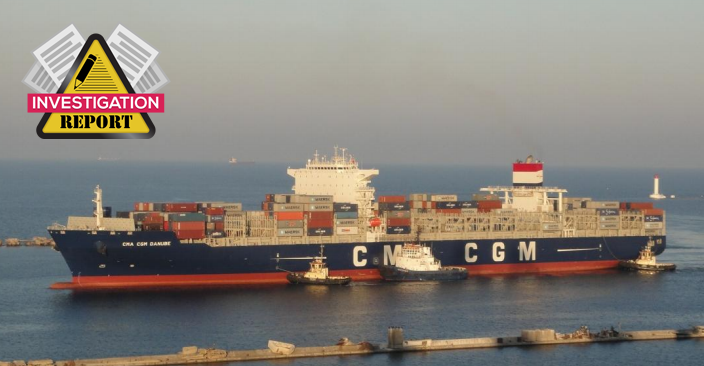 Transport Malta MSIU issued an investigation report on the grounding of the Maltese-registered container ship 'APL Danube' in April 2019. The investigation revealed that the route on ECDIS had been deactivated, while the Captain was away from the console during ship's manoeuvre.

APL Danube was transiting Southbound through the Suez Canal in good weather and smooth sea.

A pilot had embarked earlier and was providing navigational advice to the master.

While approaching the Km 133 mark, the vessel suddenly started to swing to starboard.

The helm was ordered hard over to port and the main engine’s revolutions (rpm) of the vessel were increased in an attempt to correct the heading.

However, APL Danube continued to swing to starboard until it ran aground by its bow.

The main engine was set to full astern, leading to the vessel running aground by its stern shortly after.

As a result, the vessel lost her steering capability and was later refloated with the assistance of two tugs.

APL Danube was eventually towed to a dry dock in Dubai for repairs.

The vessel suffered loss of directional power due to bank effect, since it was in close proximity to the Eastern bank of the Suez Canal.

The immediate cause of the accident was identified to be loss of steering due to bank effect.

During the course of the safety investigation, the Company had carried out an internal investigation in line with ISM Code.

Information with regards to the grounding of APL Danube were shared with all vessels within its fleet, in the form of safety alerts and accident feedback.

The Company’s internal investigation report was shared with the Company’s marine superintendents and training centres.

The hours of rest procedures that were incorporated in the SMS, were revised to include delegation of the con while the vessel was on passage through a long canal transit.

This would allow / necessitate the chief officer to take over the con and for the master to be able to take some rest. 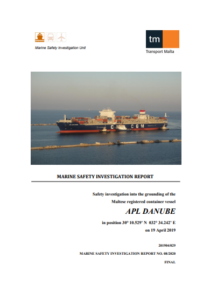