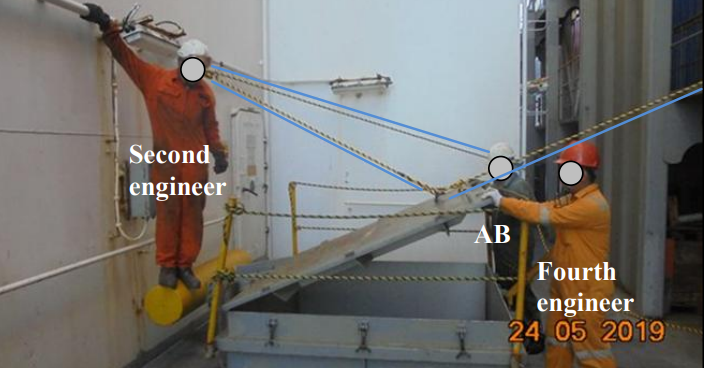 Transport Malta MSIU issued an investigation report on the serious injury of a crew member onboard the container ship Vermont Trader while anchored off Hong Kong in March 2019. With respect to this incident, Transport Malta noted that the process of opening the engine room hatch cover by one person alone seems impracticable.

On 21 March 2019, Vermont Trader was lying at anchor at the Southeast Lamma anchorage, in Hong Kong.

The second engineer, fourth engineer and an able seafarer (AB) set out to open the engine room’s hatchway.

The second engineer positioned himself beside the counterweight.

As both the fourth engineer and the able seafarer lifted the engine room hatchway cover, the second engineer, placed his body weight onto the counterweight to assist in the opening of the engine-room hatchway.

During this operation, the second engineer’s left leg slipped and became trapped between the hatchway coaming and the counterweight, resulting in a fractured shinbone.

He was subsequently evacuated by helicopter and transferred to the nearest hospital, for treatment.

During the course of the safety investigation, the Company had discussed the occurrence with the shipboard management team, highlighting the need to operate equipment correctly.

Furthermore, during the HSEE meeting, an exercise was intended to be carried out where possible additional training requirements related to the correct use of equipment were to be identified.

The training needs would then be forwarded to the vessel’s Master and Safety Officer for follow up.