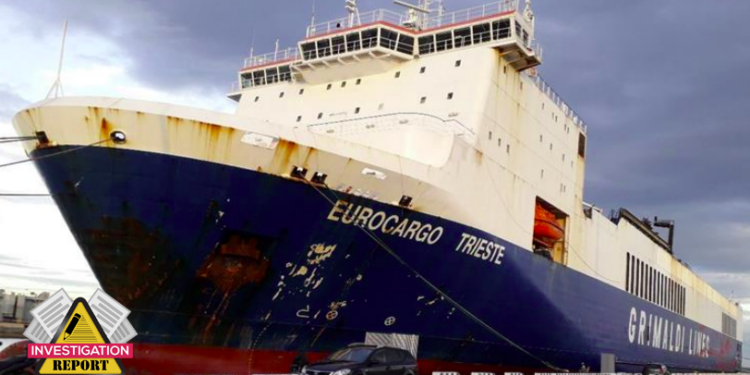 Transport Malta issued an investigation report on the engine-room fire onboard the Maltese-registered RoRo cargo vessel Eurocargo Trieste, following departure from the port of Livorno in November 2019. The investigation identified an accidental fuel spill onto a hot surface, as the most likely cause of the incident.

At around 0123 on 21 November 2019, ro-ro cargo, motor vessel Eurocargo Trieste had left Livorno, for Savona, Italy. There were 25 crew members onboard and the vessel was laden with trailers.

Due to thick smoke and difficulties to enter the space, the fire-fighting team retreated, and the master decided to flood the engine-room with CO2. The gas was released at 0230. The vessel contacted Livorno’s port authorities at 0240 requesting fire-fighting assistance.

However, the vessel lost all power and was subsequently re-berthed at 1720, with the assistance of tugs. None of the crew members were injured and no pollution occurred, but the vessel’s engine-room sustained heavy damage.

The safety investigation concluded that the fire was most likely caused by fuel spilling accidentally onto a hot surface, near the entrance to the purifier room.

Once the fire started, it spread quickly due to the presence of combustible material, leaking heavy fuel oil and lubricating oil around the engine and its bilges.

In addition to allowing the spread of the fire, this most probably would have further compromised the effectiveness of the CO2 system, since each of these rooms had their own battery of CO2 bottles for fire-extinguishing.

In view of the conclusions, Transport Malta recommends the owner to provide guidance in the vessel’s SMS on good housekeeping practices with reference to monitoring of oil leaks.