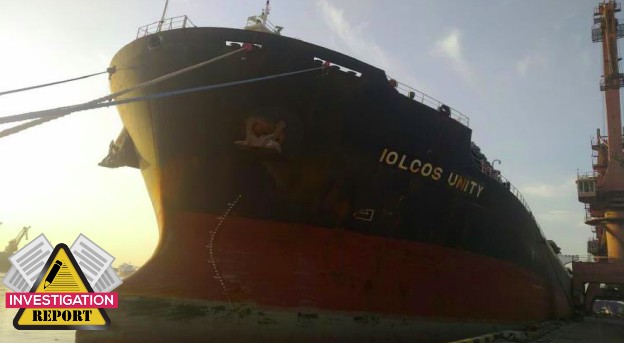 Transport Malta issued an investigation report on the fatal burn injury of a fitter onboard the bulk carrier ‘Iolcos Unity’ in June 2020. The incident occurred as the fitter was using an angle grinder which generated sparks on its covered-with-oil overall.

In the early hours of 28 June 2020, one of the fitters onboard bulk carrier ‘Iolcos Unity’ was instructed to investigate a hydraulic oil leak on one of the ballast valves on the main deck.

Crawling to gain access to the leaking flange, the fitter’s overall was permeated with hydraulic oil. While using an angle grinder to cut the bolts, sparks generated by the grinder ignited his overall. The fire spread fast, covering his upper body, neck, and hands.

The fitter was evacuated to the ship’s hospital and later transferred by ambulance to a local hospital for burn injuries. The fitter eventually passed away on 08 July 2020 following medical complications.

The company carried out an internal investigation in accordance with Section 9 of the ISM Code. The findings of the internal investigation were discussed during an extraordinary meeting. Moreover, relevant company procedures and risk assessments were reviewed to implement the necessary controls and procedures and avoid a reoccurrence of this accident. The following corrective/preventive actions were adopted by the company:

EXPLORE MORE in the full report