Transport Malta MSIU issued an investigation report on a serious injury of a crew member onboard the tanker 'Sichem Ruby' off Spain in January 2019. While the pumpman was tightening the bolt, the Teflon blank dislodged and gave way under the pressurised sulphuric acid, which remained trapped in the pipeline.

On 20 January 2019, Sichem Ruby was in transit to Castellon, Spain, with a cargo of sulphuric acid that was loaded, in Aviles, Spain.

During the previous cargo operations, the pumpman had noticed that one of the stripping line valves of no. 2 port (2P) was leaking slightly and on 20 January, he decided to attend to it.

The pumpman removed the valve and replaced it with an overhauled one.

At that time, the pumpman was wearing an overall and a pair of safety shoes, as part of his personal protective equipment.

However, as he was tightening the first bolt on the flange to his right, sulphuric acid sprayed into his face and body.

The pumpman started shouting and immediately ran to the decontamination shower on the port side, but found no water.

He went over to the starboard side, by which time, one ordinary seafarer (OS) noticed him running.

The OS went directly to help him and opened the fresh water supply line for the pumpman to flush his face and body with fresh water.

He was eventually airlifted to the nearest hospital, where he stayed for several days to receive treatment.

The pumpman had suffered from chemical burns affecting his face, neck, both upper extremities and right thigh.

His right eye was injured and consequently, his vision deteriorated after this accident. Following repatriation, he continued receiving medical treatment at a local hospital.

Sulphuric acid sprayed from between the Teflon blank and the pipeline flange which was to the pumpman’s right side, while the pumpman was securing the first bolt on the reconditioned valve.

It is the view of this safety investigation, that while tightening the bolt, the Teflon blank dislodged and gave way under the pressurised sulphuric acid, which remained trapped in the pipeline.

During the course of the safety investigation, the company took the following actions: 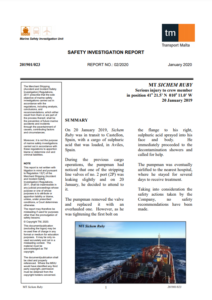