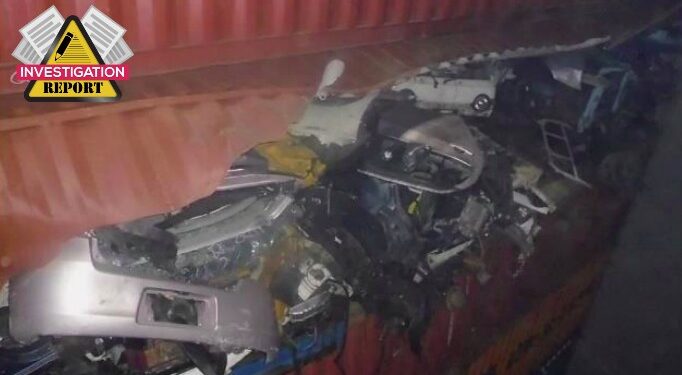 The exploded container in the cargo hold / Credit: Transport Malta

Transport Malta MSIU issued an investigation report on the cargo explosion onboard the container ship MV Croatia while underway, in February 2020. The investigation established that flammable vapours had accumulated inside the container, which contained scrap metal and used car parts, resulting in an explosive atmosphere.

Whilst underway towards Singapore, an explosion occurred in Croatia’s cargo hold no. 7. A fire party was immediately mustered by the master to assess the situation inside the cargo hold.

An inspection of the area revealed that an explosion had occurred inside one of the containers stowed in the cargo hold, damaging five other containers and several ship fittings.

The charterers were contacted, following which it was confirmed that no other explosion risks were foreseen. The cargo manifest revealed that the container carried scrap metal and used car parts.

Evidence submitted to the MSIU revealed that the container stowed in position 500612 had sustained substantial internal overpressure and one of its side walls and the door-leaves had been blown off.

Reportedly, the container was loaded with used auto parts. An examination of the ejected debris revealed the presence of at least eight automotive metal fuel tanks, four of which had a ballooned appearance, consistent with the effects of internal over pressurization.

The information available to the safety investigation revealed that gas measurements of the internal atmosphere of several of these fuel tanks, indicated the presence of flammable vapours within the explosive range.

During the safety investigation, the company contacted the charterers to inquire on the steps that would be taken to prevent reoccurrence of such accidents. By means of a circular, the Charterers drew the attention of their shippers to their cargo policies, which addressed measures to be followed when classifying used auto parts commodities / components. Furthermore, it raised awareness on the importance of making a correct declaration for used auto parts, making specific reference to the accident involving Croatia.