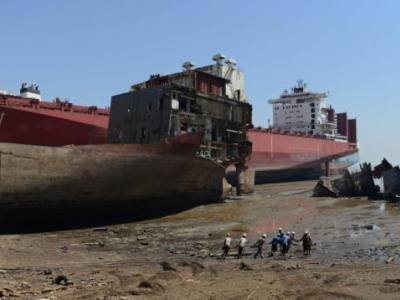 Towards cleaner scrapping of old ships

Towards cleaner scrapping of old ships

Plans to clean up the scrapping of old ships and ensure the materials are recycled in EU-approved facilities worldwide were revised by the Environment Committee on Tuesday. MEPs propose that the scheme be funded by a recycling levy, in line with the "polluter pays" principle. Owners of EU ships would also face penalties if they sold them for scrapping on a beach in developing countries.

The draft regulation aims to reduce the adverse effects of careless scrapping, such as accidents, injuries or damage to human health or the environment, by ensuring that EU ships, and non-EU ships that have called regularly at EU ports, are scrapped in EU-approved facilities worldwide. An EU fund, to be financed by levies on all ships visiting EU ports, would make scrapping ships in EU-approved facilities competitive.

"Today's vote will hopefully put an end to EU ships being recklessly scrapped in developing countries. Currently, most EU ships are sent to South-East Asia at the end of their lives, where they are beached and their hazardous materials harm human health and the environment", said Carl Schlyter (Greens/EFA, SE) who is steering the legislation through Parliament.

"MEPs have today voted by a very large majority to create financial incentives to scrap ships safely, including a recycling fund financed by the industry itself. This would steer ships that trade with the EU into proper ship recycling facilities. We hope that this will now be included in the final legislation", he added.

The law would apply to EU ships, but some of its provisions, including the recycling levy, would also apply to any ship calling at a port or anchorage of an EU member state.

To help make the scheme economically viable, a recycling fund should be set up, says the committee. Both EU and non-EU ships should be able to use the fund, which would be financed, in line with the "polluter pays" principle, by a recycling levy to be charged for any port call by EU or non-EU ships. Ship owners could choose between an annual recycling levy, directly payable to the fund, and a fee per port call, which would be collected by port authorities.

Ships would be exempted from paying the recycling levy if their owners have deposited a financial guarantee to ensure that they use EU-listed facilities for recycling and treatment. Charging the levy on port calls would make it impossible to evade by "outflagging", i.e. re-registering a ship outside the EU.

Penalties would be imposed on owners of EU ships that are sold and sent, within a twelve months of the sale, for recycling on a beach or in a facility not on the EU list.