In its Shipping and Safety Review for 2019, Allianz provided an overview of the top ten largest ships lost in 2018. The report notes that Asia and Middle East accounted for most of the disasters. The largest ship lost in 2018 was the explosion and sinking of the Iranian tanker 'Sanchi' off Shanghai in the very first days of the year. 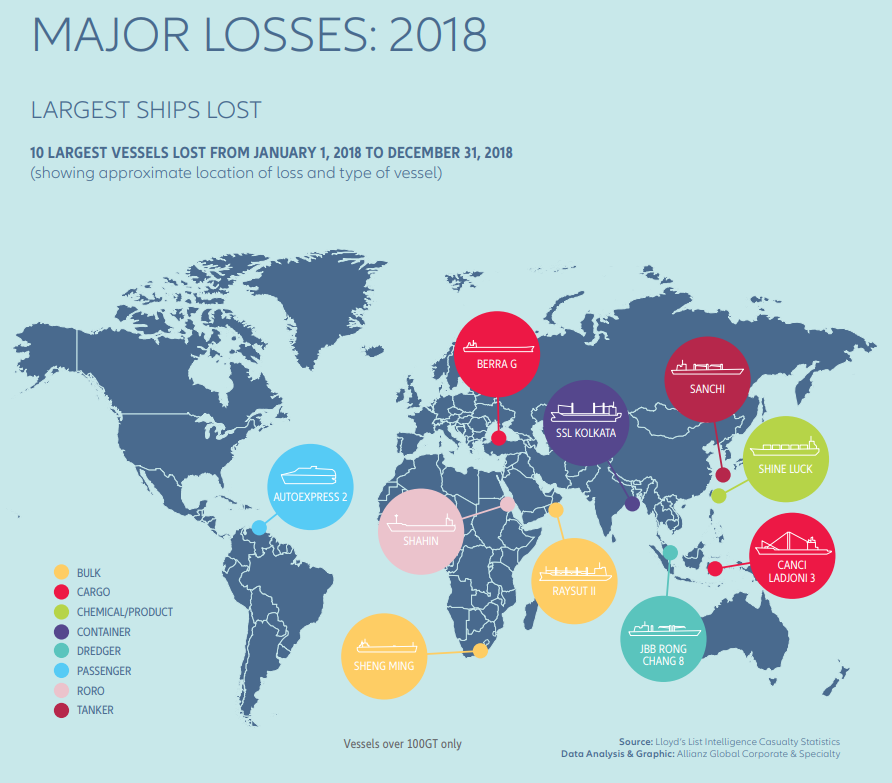 The 85,462GT tanker, operated by National Iranian Tanker Co, was sailing from Iran to South Korea, carrying 136,000 tonnes of condensate, when it collided with the ‘CF Crystal’, on 6 January, about 160 nautical miles off the coast, near Shanghai and the mouth of the Yangtze River Delta, and went ablaze. After burning for more than a week, it eventually sank on 14 January, causing one of the worst oil spills in over 30 years. The entire 32 crew perished in the accident.

The 2,995GT cargo ship dragged its anchor amid heavy weather conditions, drifted and ran aground at Eregli, Turkey.

The 2016-built dredger was en route from Singapore to Telok Ramonia, sailing in western direction, when it capsized with 18 crew onboard, off Parit Jawa, Johor State, Malaysia, in the morning hours of Wednesday, 21 March. 13 crew members lost their lives and five were rescued.

The 4,759GT RoRo ship sank off Port Sudan. Vessel had been under arrest by Port Sudan civil court for a considerable period.

The 38,403GT bulk suffered 12 miles off Cape Town a partially flooded engine-room. It was reported sunk on 28 May.

The 10,880GT bulk carrier, laden with about 6,750mt of dry powdered cement, grounded off the pristine beaches of Al-Fazayah Beach, Salalah, Oman. The vessel was later recycled.

The 9,956GT container ship was en route from Krishnapatnam Port to the port of Kolkata, carrying 464 containers, when it suffered an explosion to one of its containers and a subsequent fire.

The 3,274GT chemical/product tanker ran aground off Kaohsiung port, Taiwan, due to bad weather. It broke in two shortly after and local authorities decided to remove the hull as soon as possible in order to reduce the risk of pollution. The oil removal operations lasted until 17 June.

The 5,419GT passenger ship sank in the port of Guanta, Venezuela, due to water ingress.

Today’s record low loss activity is the culmination of a number of initiatives, regulatory responses and innovations, such as improved ship design and more robust safety management systems on vessels. At the same time, we are also seeing an improvement in the insurance environment with positive signs in the hull market, driven by lower claims activity and technical underwriting. However, the lack of an overall fall in shipping incidents, as well as heightened political risks to vessel security and compliance with emissions rules in 2020 bring new challenges,