In October 2017, the sinking of Emerald Star, loaded with nickel ore, claimed the lives of 11 seafarers / Credit: Shipspotting 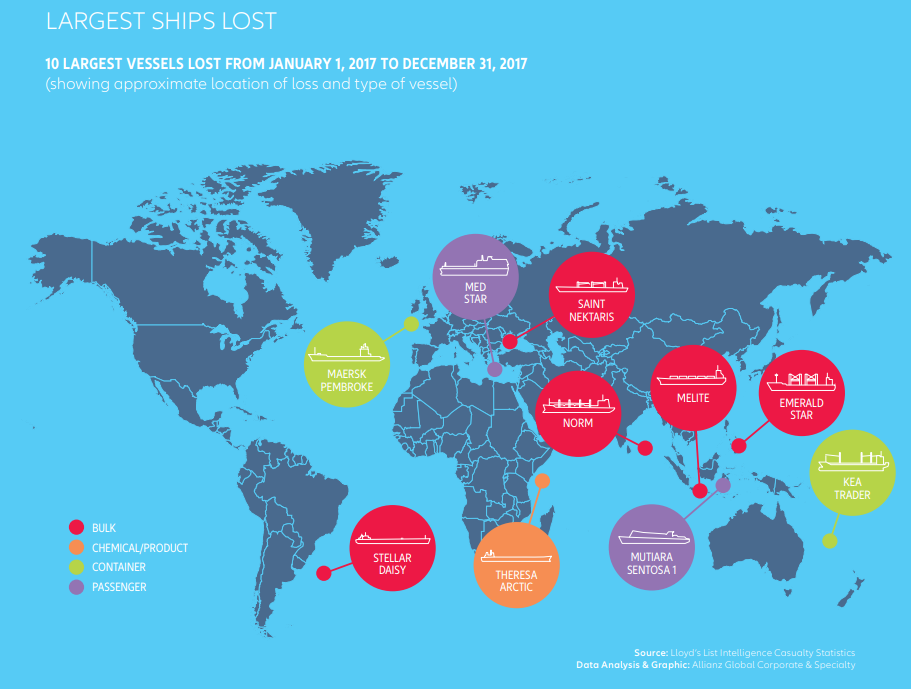 In its recently-published Shipping and Safety Review, Allianz cites a top-10 list of the largest ships lost throughout 2017, noting that half of the cases involved bulk carriers. The highlights of the year were the sinking of the two bulk carriers, ‘Stellar Daisy’ and ‘Emerald Star’, which caused death of a total of 33 seafarers and stressed safety risks related to cargo liquefaction.

The 13,697 GT bulk carrier suffered an engine failure at Varna, Bulgaria. She was later towed to scrapyard pier.

The 148,431 GT bulk carrier sank after taking on water due to a hull crack, approximately 3,700km off the coast of Uruguay. Only two of its crew were rescued while 22 crew remain missing.

The 12,365 GT ferry suffered a fire onboard while underway off Masalembu Island in the Java Sea. Five people died, while several remain missing. 192 were rescued.

The 16,776 GT bulk carrier sustained fire off Rhodes island, Greece. The fire was extinguished and the ship was towed ans sent for break-up.


The 43,414 GT product tanker grounded on reefs off Kilifi, Kenya. She was later refloated and sent for scrap.

The only six-month old 25,145 GT container ship ran aground on the Durand reefs off Mare, in New Caledonia. She sustained damaged beyond repair, while salvage operations are yet to be completed to date. The official report released last week revealed that a series of human errors related to poor judgement and unfamiliarity with ECDIS led to the grounding.

The 31,333 GT boxship suffered a fire while sailing approximately 400km off Isles of Scilly. The fire was extinguished. The ship was towed and sold for break-up.

The 25,190 GT bulk carrier sustained an engine malfunction near Rondo Island, Indonesia. She was towed and sent for demolition.

The 33,205 GT bulk carrier sank off the coast of the Philippines. 15 crewmen were rescued and 11 are still unaccounted for.

The report however revealed that 2017 saw the second lowest total of shipping losses over the past decade and losses in the last ten years have declined by more than a third (38%), driven by improved ship design, technology and advances in risk management and safety, as well as recent lower shipping activity.

The frequency and severity of total losses declined over the past year, continuing the positive trend seen over the past decade…However as the use of new technologies on board vessels grows, we expect to see changes in both the risk profile of shipowners and the maritime loss environment in future. Insurers will have to deal with a growing number of more technical claims – such as cyber incidents or technological defects – in addition to traditional losses, such as collisions or groundings,