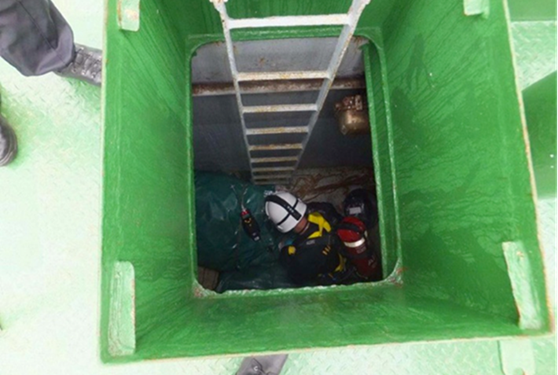 Three crewmen onboard the general cargo ship ‘Appolo Kita’ have reportedly lost their lives from asphyxiation after an enclosed space entry, while the ship was was underway off Ishigakijima, on 9 November.

According to sources, the ship was en route from Kalimantan to Osaka, Japan, carrying wood, when the three crew members lost consciousness after entering a cargo hold. The ship interrupted voyage and the crewmen were transported to Ishigaki for medical care, but they did not recover. The cause of the accident is believed to be extreme low levels of oxygen inside the hold.

The incident coincides with the launch of an official campaign by InterManager, the international trade association for the shipmanagement sector, aiming to stimulate seafarers to think about safety issues when working in enclosed spaces and encourage them to identify and share measures which they believe would reduce risks.

How may a seafarer be suspicious that a space he/she is about to enter is dangerous (if no relevant poster or sign exists)? A space like the above:

Another similar incident was reported in September, involving two RMI-flagged vessels with three fatalities in less than 24 hours.

On the aftermath, the Marshall Islands administrator advised that Ship Managers review their confined space entry procedures and, if necessary revise them, to ensure they comply with the requirements outlined in RMI Marine Notice 7-041-1. The Administrator also strongly recommends that ship managers send a letter or bulletin to all vessels in their managed fleet addressing: