The role of gender in Sub-Saharan African maritime space

A discussion paper published by Stable Seas and One Earth Future explores the vital roles of women in the Sub-Saharan African maritime space, as well as the numerous challenges they face in entering these roles. The brief, by Laura Burroughs, Sasha Egorova, Emina Šadić, Kelsey Soeth, namely explores the role of gender in the maritime space across four Stable Seas issue areas: rule of law, coastal welfare, blue economy, and maritime mixed migration.

The business case for women leaders in shipping

As of 2016, 19 members of the African Union had developed and adopted national action plans on women, peace, and security. Several countries have improved women’s representation through new legislation and development-oriented partnerships with regional and global organizations. Senegal, for example, has been particularly successful at incorporating gender parity into its governance structures.

Meanwhile, Somalia is promoting women’s economic empowerment through a number of fisheries projects by the Food and Agriculture Organization of the United Nations (FAO). These projects include training women boat-builders and adding value to post-harvest fish catches.

There are fewer female seafarers than male ones, fewer women serving in navies and marine authorities, and fewer female members of coast guards. Women’s participation in fisheries value chains is often limited to roles in processing and marketing, rather than fishing and resource management, which are considered to be traditionally male roles.

Women today represent about 50 percent of the world’s population and, for the past two decades, about 50 percent of the labor force. Yet there are stark differences in the outcomes they achieve: women are only half as likely as men to have a fulltime wage-earning job. The women who do have paid jobs earn as much as one-third less than men. Fewer women than men are involved in trade or own registered companies. And women are more likely to work in low-productivity activities or informal employment,

Women’s work in the fisheries sector often goes unrecognized in research and by creditors, policy makers, and development programs, resulting in a lack of support for their work. In Sierra Leone, fisheries supports over 500,000 people, around 85% of whom are women. However, their incomes are still much lower than those of their male counterparts, and many women report struggling with other restrictive factors.

This is problematic for women’s livelihoods and empowerment, and it distorts fisheries data and results in misinformed management measures. Women’s work in the fisheries sector must be understood and supported in order to advance gender equity, food security, and effective fisheries management.

UNICEF estimates that 24% of global trafficking victims are children, but for sub-Saharan Africa this estimate rises to 64%. In Gabon, girls are trafficked through middlepersons, young girls from neighboring countries also run the risk of becoming child brides in Gabon. Boys who come to Gabon seeking work can be lured into unpaid and unsafe jobs, while others are trafficked in the fishing sector, forced into dangerous jobs on the open sea. 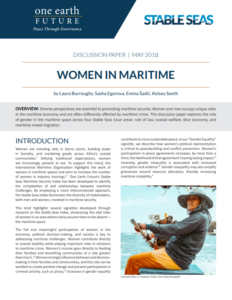