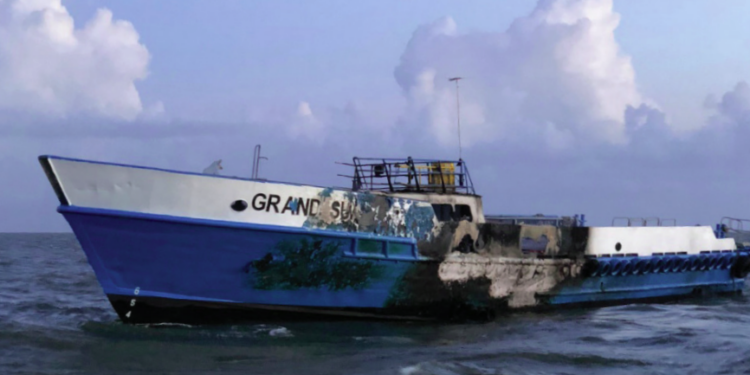 Fire-related casualties and explosions constitute the majority of incidents investigated in 2019, as shown by the latest NTSB Safer Seas Digest released last week. The type of vessels mostly involved in such incidents included fishing vessels and towing vessels with barges.

The fire incidents investigated through 2019 were the following:

According to NTSB, the probable cause of the explosion aboard the barge B. No. 255 was the lack of effective maintenance and safety management of the barge by the owner which resulted in crude oil cargo leaking through a corroded bulkhead into the forepeak void space, forming vapor, and igniting. Contributing to the accident were the ineffective inspections and surveys by the USCG and the ABS.

The probable cause of the engine room fire was an undetermined electrical ignition source near electrical distribution cabling in the lower engine room.

According to NTSB, the probable cause of the fire was the crew’s lack of compliance to the company’s SMS and the marine chemist’s instructions pertaining to hot work precautions. The latter allowed sparks and slag to fall through unprotected gaps between the removable decking pontoons and ignite the dust-protective covering of the transmission hubs.

NTSB determined that the probable cause of the fire on the Grand Sun was the overheating of electrical wiring associated with a chest freezer or the receptacle powering it, which was located in an accommodation space.

The NTSB determined that the probable cause of the fire aboard fishing vessel Hit List was the failure of a hydraulic hose fitting that sprayed pressurized hydraulic oil onto the engine, eventually causing the oil to ignite.

NTSB suggests that an engine lube oil leak ignited off a hot surface near the starboard main engine turbocharger. Contributing to the severity of the fire was the lack of crew measures to activate the engine fuel supply shutoffs and secure open doors ventilating the engine room.

According to NTSB, inadequate crew training and oversight by the company to ensure safe hot work practices were followed onboard the vessel.

NTSB determined that the probable cause of the fire aboard the cutter suction dredge Jonathon King Boyd was the operator’s failure to inform the crew about utilities in the area due to ineffective oversight, which led to dropping a spud onto a buried submarine pipeline, causing natural gas to release and ignite.

The probable cause of the engine room fire onboard the Leland Speakes was a catastrophic failure and crankcase breach of the port main engine resulting from failure of the caps that secured two piston connecting rods to the crankshaft.

The fire aboard the fish tender Logger likely originated in the engine room from an unknown source.

NTSB determines that the probable cause of the fire aboard the fishing vessel Master D was leaking lube oil from the diesel generator that contacted a hot engine surface and ignited. Contributing to the eventual sinking was the failure of fire-damaged nonmetallic hoses connected to through-hull fittings below the waterline.

NTSB concluded that the probable cause of the fire and sinking of fishing vessel Ole Betts Sea was a mechanical failure of the generator’s diesel engine, which led to a fuel-fed fire that burned out of control.

The probable cause of the fire aboard the fishing vessel Rose Marie was arcing of an electrical wire in the engine room overhead igniting a wooden cable trunk. Contributing to the severity of the damage was the installation of a trunk that compromised the steel boundary of the engine room, allowing the flames to spread to the combustible materials in the upper decks.

Meanwhile, ‘Securing ventilation and openings during a fire‘ and ‘Fire protection during hot work‘ were also in the list of the top safety lessons learned in 2019, according to NTSB. For the Rose Marie incident, NTSB said:

Grenade-type aerosol fire extinguishers were used to fight engine room fires in this accident and an earlier fire on the fishing vessel Logger—but did not extinguish the fire in either accident. In both cases, the crews did not close all openings, such as engine room doors and other ventilation, thus reducing the effectiveness of the extinguisher. When using such devices or designing any vessel space for the prevention of fires, vessel owners and operators should identify openings, provide means to ensure they can be properly secured in order to contain a fire, and train crewmembers on how to secure them during a fire emergency.

For the Chipolbrok Moon incident, it was stressed that: