The hidden risks of biological corrosion 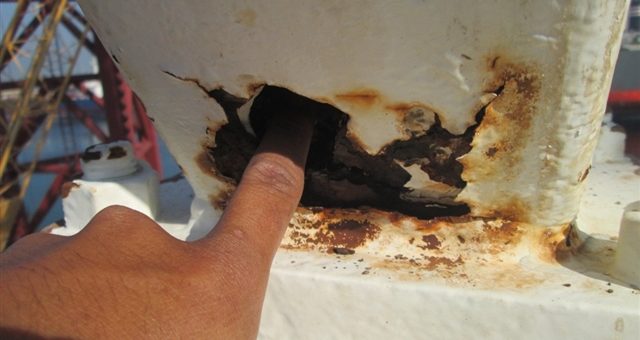 The IVR Association issued an informing paper explaining the hidden risks of biological corrosion and providing additional information on how to avoid bacteria that damage ship bilges; The technical leaflet “Biological Corrosion” is focusing on a number of cases where the issue of leaking engine rooms seems to be more and more common these days.

Accordingly, the phenomenon of leaking engine rooms is mostly caused the water ingress is by very local corrosion perforations. Investigations that followed revealed that the corrosion is taking place from the inner side of the plating and proceeds to the outside, until a perforation occurs, making it hard for the inspectors to understand whether there is a corrosion problem when conducting bottom inspection and thickness measurements.

Although corrosion is commonly perceived as a chemical process, in this cases, the corrosion is caused by microbiological activity. Also, this type of corrosion is usually taking place in the engine room as the bacteria “blossom” in carbonaceous bilge water. This automatically makes it difficult to identify because bilges are hidden below the engine room floor plates and are mostly dirty.

Furthermore, this phenomenon is commonly noted in older ships. Biological corrosion starting from the inside cannot be detected during a bottom survey from the outside. Under the possibility that one finds one of these caters during random thickness measurements,it would be just by chance.  In the case of class renewals, it is also not common practice to clean the bilges thoroughly for inspection.

Moreover, due to the fact that perforations are sudden and unexpected they lead to crucial damage, as towage and flooded engine rooms.

Therefore, the IRV advises that “To avoid bacteria on ship bilges, older’s ships floor plates in the engine room should periodically be removed once every 20 years, in order to allow the cleaning of the bilges with the pressure washer and to preserve the inside of the plates.”

Today, to easily deal with vessel corrosion and its detection, the US Navy trialled an unmanned aerial vehicle as another tool in its inventory for the management of corrosion on its ships.

Concluding, IVR is the International Association representing the mutual interests of the inland shipping in Europe.